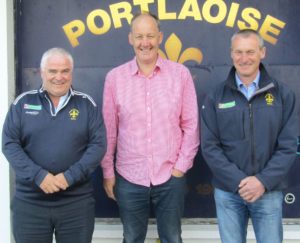 PORTLAOISE RFC have announced the appointment of Johan Taylor as head coach for the next two seasons. Johan brings a wealth of experience with him which will be a great benefit to the club.

The South African came to Ireland back in 1997 for a ‘short’ stay as he says himself. Now, 25 years later, he has build up an impressive reputation as a coach, and not just across Leinster, but also internationally.

Johan is well versed with rugby the area having played and coached Portarlington while Naas and Cill Dara have also experienced his expertise.

He spent five years with Cill Dara before heading to Sri Lanka to take up the appointment of National coach winning two Asian Nations Cups. The National team compete in a similar competition to the European 6 Nations against other Asian nations.

He is an IRB qualified coach and was the head of rugby for the former French national coach, Phillipe Saint Andre at his Academy in France. Currently Johan is a director of the Kildare-based Rugby Academy Ireland along with Dan Van Zyl.

Johan is looking forward to taking up his new position and is impressed with Portlaoise RFC’s plans for the future.

Mr Reddin went on to say: “This is a new era for the club Johan is the right man to develop our tactical approach and winning mentality on the field. This is an illustration of our ambition to promote and develop local players for the future.”

Johan said: “I think the majority of junior clubs experience the same issues due to Covid and other factors not always in their control. I am impress with the way the Executive are planning to deal with these issues and therefore feel I can positively influence the future of the club and especially the younger of the senior players,” said Johan.

Looking back to his time in Sri Lanka, Johan said: “Sri Lanka reminded me what rugby can offer to dedicated players and supporters across the globe. I still go back as a consultant every year and always appreciate the different rugby cultures on and off the pitch.

“It is a really unique culture due to the very long civil war but with a fully professional rugby environment. Players like Chris Cloete of Munster played in Sri Lanka and made it a really competitive local league.”

And Johan is wasting no time in setting the wheels in motion. Already he has been in contact with some players personally and has organised a meeting in Togher for Wednesday at 7.30pm to which all club, and potential club, players are invited.