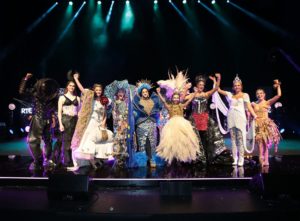 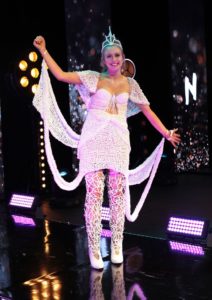 Creation Minima’ modelled by Emma Tuohy which she designed with fellow students Alison Dalton and Orlaith McNamara, from Scoil Chriost Ri, Portlaoise, Co Laois, which was announced as a Junk Kouture world finalist at the Junk Kouture Irish Final at the Bord Gais Energy Theatre.
The creation is made out of over 100,000 tiny Styrofoam beads found in an old beanbag chair and inspired by designed Zac Posen
Photo: Brian McEvoy

The winning entry, entitled ***Minima***, was designed and created by Alison Dalton, Emma Touhy and Orlaith McNamara and was made from more than 100,000 tiny styrofoam beads found in an old beanbag chair. The outfit was inspired by designer Zac Posen.

The students showcased their winning entry in a segment on last night’s Late Late Show.

Sixty haute-couture designs made from 100% recycled materials created and modelled by talented post-primary students took to the stage for the Dublin City Final at the Bord Gáis Energy Theatre.

Nine was the magic number on the night, as nine creations by young designers aged between 13 and 18 from around the country were chosen by ***Junk Kouture*** judges Louis Walsh, Roz Purcell, Soulé and Stephen McLaughlin to represent Ireland in Abu Dhabi. However, hope is not lost for the Dublin City finalists who failed to make the top nine, as RTÉ 2FM’s Tracy Clifford revealed that a wildcard spot was still up for grabs.

The ten Irish entries will be up against 50 other designs – ten from each of Junk Kouture’s other city finals in London, Paris, Milan, New York and Abu Dhabi.

At the world final, there will be six individual City Designer Awards for each location, plus the first-ever ***Junk Kouture*** World Designer of the Year! Other prizes on offer include the Glamour Award, Wearable Art Award, Innovation Award and a Performance Award.

The Creative Ireland Programme continues to support Junk Kouture across several areas developing its online education resources to ensure that students and educators alike can avail of educational material around Junk Kouture’s three areas of focus – creativity, sustainability and entrepreneurship. Programmes driven by the support of Creative Ireland will help educators encourage young people to become micro-influencers for change through creativity and circularity.

Don’t forget to tune into the highlights show on Thursday 19 May on RTÉ2 and RTÉ Player!