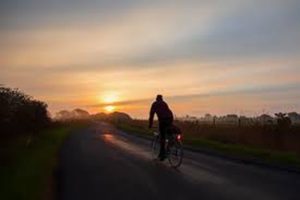 RECENTLY, as I was cycling in rural Roscommon, I passed another cyclist, bidding him hello as I did so. I surmised he was probably local to the area and, not being garbed in any kind of cycling attire, was probably just getting from A to B, as they say. I surmised also that he was a younger man than I, and I wondered whether he might be put out by being passed by an auld fella.

I hardly had that thought formed when I heard furious peddling behind me, and the recently passed cyclist drew up alongside. After he caught his breath, he turned to me and announced: “This country has gone to the dogs.” He then launched into a string of woes, not least of which was the horrific murders which had taken place in Sligo some days before. I couldn’t disagree with him on that one.

As we peddled along, side by side, he rummaged in his pocket and produced one of the old flip-top mobile phones which, unlike the man holding it, was not of the smart variety. ”I won’t be getting one of those fancy phones,” he announced. ”They can find out everything about you with them, and it’s not all being controlled from Dublin,” he added. Before he had a chance to elaborate on this conspiracy theory, we reached a crossroads (not a symbolic life event, but physical feature of the road infrastructure). ”This is my turn,” says he, as he wished me good luck and off he went. Our brief encounter had ended almost as abruptly as it begun.

But it did provide me with some food for thought, and a timely subject for this month’s missive –  information and the gathering of same.

Officialdom has always been gathering information on its citizens for a variety of reasons. In the case of the census, which is topical just now, the earliest census of Ireland available online is a partial record for 1821 – exactly two centuries before the original date planned for the present census, but for the pandemic.

Predating that record, we have some very detailed records in the form of William Shaw Mason’s ***Statistical Account or Parochial Survey of Ireland***, the earliest volume of which was published in 1814. Shaw Mason was a government-appointed statistician and his parochial survey should have comprehended the entire country. Sadly, the project was halted after just three volumes were published, the last in 1819. It has been suggested that Shaw Mason’s survey was too comprehensive –  particularly in relation to the levels of poverty in the country – and the less the government knew, the less costly it would be to address the issue. A case of too much information.

As for the aforementioned census of 1821, from a fragment which does not include the location, I can tell you that a Bryan McGrody was married to Eleanor. She was 40 years of age, nine years his junior. Bryan was a labourer and his wife was a flax spinner. The latter trade might suggest an Ulster connection. They had four children, ranging in age from ten years to baby Jane, who was not yet a year old. Fairly basic information that really didn’t do much more than enumerate the population.

In 1831, however, in addition to the very basic family information of the previous census, households were now required to return the number of servants, male and female. There was also a requirement to disclose religious status, which was categorised as Established Church, Roman Catholic, Presbyterian and Other Protestants. There was a further requirement to disclose how many families resided in each house and the male and female breakdown. This census also recorded the barony, parish and county of each house.

The census of 1841 amplified the family information considerably. For children under a year old, their age by months was now required. The relationship with each person to the head of the household was required, as was marital status, including year of marriage. Occupation and education were required, as was native country and county or city of origin. There was also a requirement to return details of those resident in a household who had died since the last census, including the cause of death and the year of death. Interestingly, I came across a woman in the 1841 census who was a visitor to a household on census night. She was 38 years old and a widow, and her occupation was recorded as ‘begging’.

The next available online census records are those of 1901 and 1911, with which many of you will be familiar. These are complete records and well worth a dip into every so often.

As to the present census; it presents quite a contrast in information to the census of 1821. In 100 years’ time, the present census will be opened up to the public, most of whom have not yet been born. They will no doubt be enthralled to find when my house was built, whether I owned it or paid rent, and what kind of fuel I used to heat it. They can marvel at my occupation, how I travelled to work, even what time I normally left the house. They will probably have a right laugh at how I communicated and at how many phones, laptops and tablets were in the house. And if that isn’t enough, they can find out how I was supplied with water and, indeed, where my waste went.

All of the aforementioned has the stamp of officialdom on it. The really worrying information gathering, though –  and probably the concern of my friend on the bike – is the unofficial stuff or the stealth information gathering that tracks our movements on websites and the myriad apps which we carry around with us. And that’s before we begin to think about the more sinister tracking, which tries to discover our pin numbers and banking details and makes us offers that are too good to be true. Somebody once said, if it’s too good to be true, then it probably isn’t true.

God be with the days when a phone was only for making phone calls. Perhaps an old flip-top mobile phone is the answer, and I think I know the very man who might be able to get me one.

Now if I could only remember which crossroads he turned off at.

Until the next time, stay safe and stay information-safe, too.