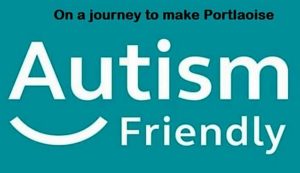 The Business Support Unit within Laois County Council is to approach Laois Chamber to see if it would be pursuing a project to make Portlaoise an Autism friendly town.

Cllr Noel Tuohy sought support for his motion from his fellow councillors at the recent meeting of Portlaoise Municipal District Council when he called on the council to consider assisting and showing leadership in Portlaoise by becoming an Autism friendly town, as is the case in Clonakilty, Co. Cork.

Cllr Tuohy said that Clonakilty is the first town in Ireland to become autism friendly. He said 212 different organisations in Clonakilty have signed up to the initiative and have placed stickers in their premises to indicate they support the initiative.

Cllr Tuohy said: “I believe that Laois County Council can play a big role in making this happen in Portlaoise and hopefully elsewhere around the county by liaising with and tapping into the already community that exists around the county.”

“Small changes are big changes to those with autism. We may talk about people with autism. But they have families, parents, sisters, brothers, uncles, aunts. They all deal with the problems that someone with autism has. Anything we can do, we should do.

“Clonakilty got nearly half of the businesses in that the town to train up one of their workers who could deal with somebody with autism if they came into the shop.

“We keep using the phrase that a society can be judged by how it treats its most vulnerable. This is a classic example of where we can make a difference. This is what community is all about,” said cllr Tuohy.

Supporting the motion cllr Caroline Dwane Stanley said: “There’s a huge number of families affected by autism on a daily basis and the challenges that they face in trying to access services and everything. I think we should start leading from the front on this.”

The council’s director of services Simon Walton said that Clonakilty has an autism friendly town plan which has been adopted locally.  The plan sets out the various compliance issues and individual business apply for accreditation and to get involved.

Mr Walton said: “We’d be happy to engage with Laois Chamber of Commerce with a view to rolling out a similar autism plan here in Portlaoise.”