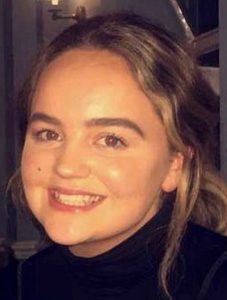 A young Laois woman has taken off in her in Aviation career and is heading to great heights after completing her fourth year of Aviation Management with Pilot Studies at DCU.

Shannon Ward from Mountmellick is now working with Ryanair with their ground’s operations team at Dublin Airport.

The 22-year-old interest in aviation began when she started going on holidays and found the operations around airports fascinating.

Shannon is the daughter of Ann and Tommy. She has three sisters Regina, Mary and Grace and a brother Anthony.

She was educated in the girl’s school in Mountmellick and went on to Mountrath Community School. From there she studied for a Performance Diploma at Griffith College Dublin.

But it was her love of avionics that brought her to UCD and to take the four-year Aviation Management with Pilot studies.

Shannon said: “I always had an interest in aviation. I got an interest in it when I was in airports going away on holidays. From there it was everything to do with air traffic control.

“At the moment I’m working full-time with Ryanair with their ground’s operations team. It involves plotting routes, setting out itinerary for weight and balance distributions on the various airplanes, fleet planning, fuel consumption, working out timetables and everything that goes on to get the aircraft from the ground to the sky.”

She said that she vaguely recalls the old Microsoft Flight Simulator games that first came out for desktop computers.

While working with Ryanair, Shannon also spends some of her time back in UCD teaching Transition Year students how to test drive three Cessna 172 flight simulators at the new MobileNewton Room at Dublin City University.

While the initiative is in it’s being pilot stage Shannon said that it is hoped that it will go mainstream which will encourage all TY students who have an interest in aviation to get a chance to test drive the simulators. The virtual pilot programme, she said, is almost like the real thing.

Shannon will be delivering the modules to second-level students over the coming weeks.

Asked if any students from Laois have had an opportunity to take on the flight simulator Shannon said, “not yet.”