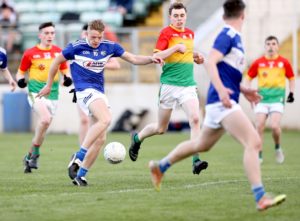 ATTITUDE defined the fortunes of the respective sides in this Seamus Heaney minor football cup first round game at Netwatch Cullen Park on Wednesday. The home side were by far the better side in the opening half yet they only went in leading by 1-6 to 2-1 at the interval.

When Laois lost James Devoy to a straight red for an off the ball incident on 37 minutes the path was wide open for Carlow to stroll on and win the game. They couldn’t do it. They didn’t believe they could win it while Laois, who struggled for most of the game, sensed it and lifted their game a tad. They just about got over the line.

Carlow were enterprising in the opening quarter. Their early goal underlined this as Caolan Brady and Shane Duffy combined to put in Cillian Moore who finished nicely.

The Laois three-pointer was a messy moment for the home defence and, when they failed to hold onto possession, David Costello was on the end to ease the loose ball just over the line. Laois notched a second goal just on half-time when Ben Byrne Slattery availed of more profligacy in the Carlow defence when they lost the ball coming out.

Matthew Farrell opened the second half scoring with a Carlow point. David Costello replied with two Laois frees. Tom Bride levelled with another placed ball effort. Carlow regained the lead and Ryan Little scored from play to level again. It was close.

The 14 Laois players upped the ante and three times midway through the half the sides were tied. With time ticking away a draw was very much on the cards. Then disaster for Carlow, or from a Laois point of view, it was a case of taking the chances which come your way.

Carlow lost the ball coming out and their opponents pounced. Little provided the final pass and Eoin Johnson finished to the net. Minutes later, the same pair combined again and Johnson was on hand to finish to the net for his second goal.

From nowhere, Laois were six clear and all they had to do was avoid an accident. This they did. Cathal Healy tacked on two points for Carlow to narrow the gap but it was never going to be enough.

Late on Jake Darcy from Laois and Carlow’s John Phiri were red-carded. There was also a small melee which almost got out of hand. 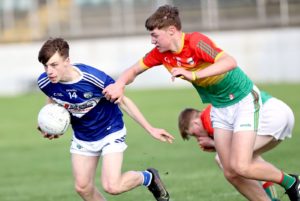 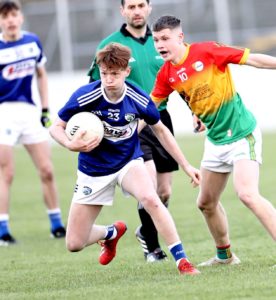