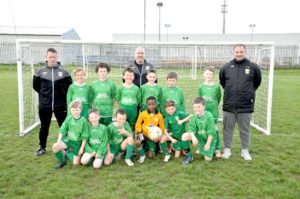 PORTLAOISE Town U/10s travelled to Tullamore on Wednesday evening to face off against Mullingar in the final of the Midlands Shield. Portlaoise came into this game on the back of an amazing run of form that had seen them unbeaten in 17 games with 16 wins and 1 draw. You would have to go back to November of last year to find the last time these boys tasted defeat.

The game started at a frantic pace and there was no sign of cup final nerves as both teams looked dangerous. Portlaoise would take the lead after just two minutes when pressure from Kian French on the right wing forced the Mullingar defence into a mistake and a misplaced pass found its way to Ryan Jacob and his first time strike found the bottom corner.

Mullingar hit back almost immediately with a well worked goal to leave the game level at 1-1 with just four minutes gone. This game was end to end stuff with both sides showing that their place in the final was well deserved. The Portlaoise midfield of Kian French Ronan O’Gorman and Zach Bowe seemed to be everywhere.

On the occasions when Mullingar were able to work their way into an attacking position they were met by the defensive trio of Ben McCormack, Harry Ryan and Tafara Zhou, who was in goals, all off whom put in an incredible first half display to keep an excellent Mullingar side to a single goal.

Portlaoise would take the lead just before half time when some excellent work down the left wing by Flynn Cullen forced a corner. Ronan O’Gorman’s brilliant delivery would sail over everybody and straight into the far top corner. Portlaoise players rushed to O’Gorman to celebrate sensing the importance of the goal in such a tight game.

The second half would start no different to the first with every player from both teams determined to be first to every ball and win every tackle. It made for a brilliant spectacle for the huge crowd in attendance.

Mullingar were having the better of the half and had Portlaoise on the back foot for large periods. They had a strong wind at their back and were using this to shoot from distance at every opportunity. To Mullingar’s credit they had some unbelievable efforts on goal but on the night came up against an inspired Tafara Zhou. Time after time he pulled off saves that looked like certain goals.

Portlaoise looked dangerous on the break which would ultimately lead to their third of the game. The ball was played up to Noah Doran and, as he held onto it brilliantly, it broke to O’Gorman who was steaming through the middle. He took the ball in his stride and placed it to the bottom corner for his second of the game.

There was still 15 minutes left and, with Mullingar still looking dangerous, Portlaoise pressed for a fourth goal. Harry Brady, as he had done all year, found himself in a great position and his effort flashed just wide.

Mullingar continued to attack but Portlaoise were holding firm with Michael Dziewonski composed at the back and Andy Cash, who was playing the striker roll, tracking back and putting in a serious shift. It was this composure and pressure that was present throughout the team the led to Portlaoise’s fourth.

Some great team play saw Ryan Jacob find himself one on one with the keeper and he coolly slotted the ball to the back of the net. Again the Portlaoise players would surround the goal scorer in celebrations. With only 12 minutes remaining and a three goal lead they possibly felt this goal had decided the game.

Although Mullingar did add one more goal, there was only minutes remaining and time was simply against them. They gave it everything in the final stages to try force their way back into the game and were a credit to their club and families in how they played the game and also how they never gave up.

The final whistle would sound and Portlaoise would celebrate an amazing achievement for an amazing bunch of boys. Their hard work and dedication all year has blown their coaches away. It was brilliant to see them embrace each other in the moments after the final whistle singing ole ole ole.

Portlaoise captain Ryan Jacob lifted the shield to the cheers of the players and all supporters.

Player of the game: Tafara Zhou 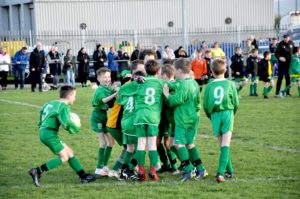