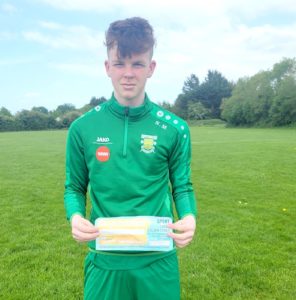 Robbie Farrell, SUBWAY player of the match for Portlaoise U/18 against Rathangan

AFTER a wobbly start to their first season in the KDUL, Portlaoise AFC U/18s travelled to Rathangan on Wednesday evening to play their last league match of the season knowing that a win would guarantee them the title. Rathangan may have been in the lower part of the table but nothing could be taken for granted by AFC against a side with nothing to lose.

Indeed an instant effort on goal for Rathangan saved low by Kacper Banacik was signalling their positive intentions. AFC’s first proper effort came via Eoin McGrath on five minutes as they started to find some rhythm after a slower start.

There was another scare for Rathangan’s keeper on eight minutes as a defensive header rattled the crossbar and the resulting corner saw AFC’s Jack Lalor have two efforts blocked in a packed box.

With 10 minutes on the clock AFC took the lead just after Ben Doyle had seen his header saved. Eoin McGrath floated in the ball from the right, flicked on by the defender and into the top left corner by Daniel Gorman. An adrenaline calming goal for the visitors.

Rathangan made a game of it for the next period with no major chances falling to either side. Midway through the half Daniel Gorman nearly had his second after Seán Savage crossed a lovely looping ball in towards the penalty spot and Gorman sprang into the air heading it onto the crossbar.

AFC weren’t taking the chances that were coming and Rathangan had a free kick and a long range effort saved. On 27 minutes Kacper Banacik saved well amongst a packed near post area. He quickly distributed to the left side to Ben Doyle, who fired a sweeping pass around the back defensive line to Cathal Lee who took perhaps one touch too much in on goal but Eoin McGrath was so close he could try back-heeling it over the line. Not enough on it though and it was saved.

Cathal Lee forced another good save from the Rathangan keeper as he struck from the edge of the box. Seán Savage had a cracker that hit the crossbar after Daniel Gorman beat the players on the left side to set him up.

Cathal Lee did double the lead on 36 minutes with a super speculative effort from 25 yards dropping into the goal over the keeper’s head.

Just 90 seconds later it became 0-3 when Daniel Gorman struck for his second as Eoin McGrath’s second attempt was thwarted but Gorman bagged the rebound. Jack Lalor had a superb volley just fly over after a carefully delivered free in from the right by Eoin McGrath leaving it 3-0 at the break.

Cathal Lee and Jack Lalor worked together to create a glorious chance for someone just after the restart but nobody else read it and the chance went abegging. Jack Lalor superbly ran to keep the ball alive in the top left corner. Robbie Farrell picked up a loose ball and absolutely slammed a fantastic half volley into the far top corner to make it 4-0 on 53 minutes.

And it was 5-0 a minute later when Ben Doyle scored a fine individual goal from the left side beating a clatter of defenders, and despite being pulled back, finished with a slight deflection into the bottom left corner.

The flurry in this period continued making it 6-0 and a surprise scorer after the dogged Eoin McGrath earned a penalty. Up stepped AFC keeper Kacper Banacik and he scored his first of the season on 58 minutes into the lower right corner.

AFC emptied the bench during this period and every sub was playing solidly. Jack Lalor was unable to find the net from a corner just pulling it wide and then a Ben Dwyer screamer from distance just missed the same post.

Rathangan did manage to get a few breaks in the final phase of the match and were awarded a penalty when the AFC keeper fouled the attacker. A consolation reward making it 6-1 was slotted straight down the middle. Rathangan had another half chance but it was pulled wide.

When the final whistle went the Premier Division was heading to Portlaoise and add to last week’s Kildare Cup and the double completed. This was a really huge achievement in this very competitive division.

Rathangan were superb throughout and showed great sportsmanship and spirit during and after the game.

This was a good solid performance with everyone doing their job. Jack Lalor and Eoin McGrath were excellent throughout and Robbie Farrell in the middle claimed the last player of match award.