Night of reminiscing in the Manor 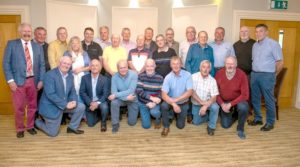 IN 1985 Laois senior footballers and hurlers contested the Leinster finals, the first time since 1938. In ’85 Mick Ahearne of Ballacolla made history by lining out in both deciders.

Portlaoise and Camross won the senior county titles, but another piece of history was made that year when Donaghmore were crowned Inter-Firms champions for the first time when they defeated St Peter’s, Portlaoise Prison, who were the reigning champions. The game was played in Ballacolla and refereed by Joe Dooley of Camross.

Played in perfect conditions the Donaghmore team, with a few add ons, played some great hurling to dethrone the champions. Last year, 2021, they planned to commemorate their one and only success but like so many other events Covid threw a spanner in the works. Now finally they got their men together and the venue was the Manor Hotel in Abbeyleix on Saturday night.

Like all gatherings such as this, it is difficult to get a date that will suit everyone, but they did very well. There was a panel of 21 players and a management team of five, no mention of a physio, no stats person, no medic of any description.

Only one player could not make it and one of the backroom team and sadly one player and one selector have passed away. Peter Gray of Kilcotton was the goalkeeper but sadly he died in 2009 but he was represented on the night by his wife, Mary and his son, Paul. Joe Nolan of Kilcotton was a long serving official of that club and had a fierce interest in this team but Joe too has passed away.

After the meal was served and short speeches were delivered each member of the panel were summoned for their presentation. For one man the event meant a lot. John Finan emigrated soon after the final and spent his time working in England. But when he received the invitation he was thrilled as were his former colleagues, they had not met him in the meantime and in 37 years he had changed very little.

Pat Dowling had a chequered career in the red and green of Rathdowney. He won minor and under-21 medals in 1976 when his brother, Michael, was captain of the under -21 team.

Pat could not make it on Saturday but big brother Michael accepted the trophy on his behalf. Michael retired from the Ballacolla branch of Avonmore early last year.

Tom Carroll of Abbeyleix had a strenuous day. He drove his camper Van to the Aviva Stadium for the meeting of Leinster and Toulouse. He is a huge follower of the oval ball and already he is in the hunt for final tickets. He rushed back to the hotel but after photographs he was whisked away to the local golf club where his family had arranged a party for his 60th birthday.

For two men it is a very special year. In 1985 PJ Lalor and John O’Dea had earlier won their first championship medals with Ballypickas, but for John there was sadness as his older brother Ned was full back and he died suddenly some years ago, but both PJ and John were present to accept their awards.

Oliver Dollard was the only Castletown representative apart from the team captain Jimmy Hanlon. In 1975 Jimmy led Castletown into senior for the first time when beating Durrow. Oliver is one of seven brothers to play senior hurling, the eldest the late Brendan, captained Borris-in-Ossory to victory in the senior final 50 years ago and the team included three other brothers Michael, Liam and Paul.

Ballacolla were represented by Val McCartney and Liam Phelan, both sterling defenders. Mog Fitzpatrick along with Tom Carroll carried the Abbeyleix flag. The Mog played in minor finals as did event organiser Jim Ring, and both won adult medals while Jim lined out with Laois seniors for several years. The two lined out on the intermediate team that captured intermediate honours in 1978 and contested a senior semi-final two years later.

Kieran Delaney and John Bergin represented Kilcotton, and the winning team wore the famous jersey all through the campaign. These two were part of the team that won junior and intermediate honours in the mid-’80s.

Then there was the most honours laden recipient in the ballroom. Owen Coss wore the Laois jersey in senior having previously lined out at minor and under-21. He played senior championship over several years but never tasted victory in any game.

At club level he had better luck winning minor and under-21 in 1982 and added a second under-21 in ’86 but recalled having to surrender the title to Camross a week later because the ’86 final had been delayed. But he holds junior from 1982 and intermediate two years later. While he has no senior championship medals he cherishes the three Division 1 league medals with the Wolfe Tones (Borris-in-Ossory and Kilcotton) won in ’88, two years later with Borris Gaels but the greatest of all in 2004 when he was honoured with the captaincy and Kilcotton, who had never lifted senior silverware despite their great history, defeated Castletown, the championship finalists, and his last award came a year later when he helped Kilcotton win the Senior ‘B’ championship beating Trumera. They had also won this trophy in 1999 beating Clonaslee.

His son Ciaran lined out with St Fergal’s, Rathdowney last week and this weekend his older son Niall lines out with Borris/Kilcotton in the Leinster senior league final in Nowlan Park against Clara.

Mountrath were represented by PJ Gorman, a prominent hurler in the ’80s winning junior and also shocked Ballinakill with an injury time goal to earn their place in senior after many years in the wilderness.

Also honoured as a member of the engine room and an important one at that time from the Swan area, Padraig Fleming. He along with Jim Ring masterminded the event and, despite his football roots, he was deeply involved in this memorable occasion. While most of us consider Padraig as one whose first love is politics, he showed himself to be deeply immersed in the success of this team.

This event might inspire other teams and clubs to honour those who brought honour to the club or parish many years ago. 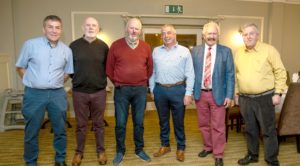 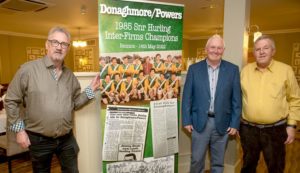 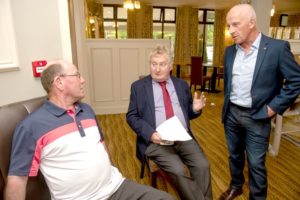 Having a chat – Jimmy Fitzpatrick and DJ Gorman with Pat Delaney 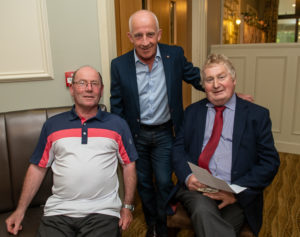 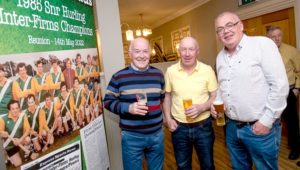 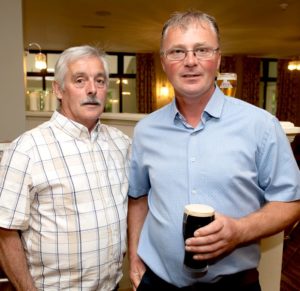 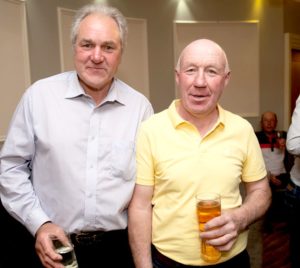 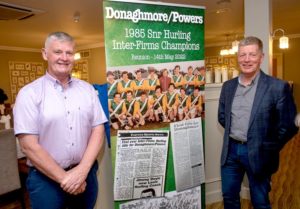