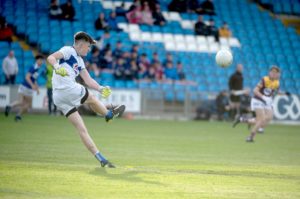 THE Laois minor footballers’ season has come to an end after a heartbreaking last minute defeat to Wexford in the Seamus Heaney Cup semi-final in MW Hire O’Moore Park on Thursday evening.

Laois came into this one off the back of a hard-fought late victory against Carlow in the quarter-final, when they scored two late goals to claw back a four point deficit in the dying embers of the game. Carlow had beaten this Wexford side in the Leinster championship so there was some confidence going into the game.

Injuries to a number of key players including Davy Costello and the loss of Kevin Byrne and Brochan O’Reilly as they head for an All-Ireland campaign with the minor hurlers meant this was a slightly depleted Laois side.

Very little separated the two teams throughout the entire game, as neither side managed to take advantage of the big breeze that was blowing into the town end. We looked all set to be heading for extra-time until Laois conceded a free late in the game and Wexford goalkeeper William Foley made the long trek up the field before slotting the ball over from distance.

Laois had the wind in the first half, and it was a strong one. Corey Geoghegan opened the scoring with a point and Rory Lalor followed with another a few minutes later, his first of three points.

Ruairi Martin opened Wexford’s account with a free and we were level shortly after Joe Doyle charged through the Laois defence before pointing.

Laois showed some patient build up play and were rewarded with a point for Michael Gaffney to regain the lead.

Disaster struck for the hosts on 15 minutes when Wexford corner back Dara Kelly was allowed to run the length of the field, right through the heart of the Laois defence and find Dean Hills free in front of goals, and he buried it in the net.

Wexford came out for the second half with the wind at their backs and Joe Doyle used it straight away with a big score from distance. Lalor responded for Laois minutes later with two points in quick succession and Laois led by a point once again.

Martin kicked one from play and one from a free as the game ebbed back towards Wexford but Laois responded with a point for Geoghegan after a fantastic run down the wing from Eoin Cawley to set it up.

Wexford would pick up a gear as we headed for the final quarter of the game. They scored three unanswered points, which put them three ahead, the widest margin so far in the game. Joe Doyle had an excellent game in centre-forward for Wexford and he scored his third point before Martin followed with a free and Hills added to his tally with a point.

All hope was not lost however, substitute Cathal Casey landed in a big high ball towards the square and Ryan Little pounced on it before coolly finishing low into the net, setting up a grandstand finish.

Callum Farrell came off the bench for Wexford and he put them in front with an excellent point, but Laois sub Tom Bride responded with a monstrous point against the wind in the dying embers of the game.

It looked as though we were set for extra-time, until the referee awarded a free to Wexford deep into injury time. Their goalkeeper William Foley made his was up and converted the free from behind the 45 and it barely scraped over the bar, but it was enough to give Wexford the win. 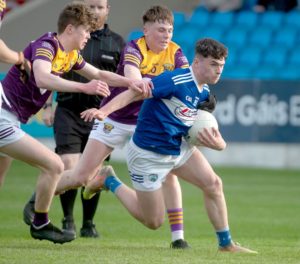 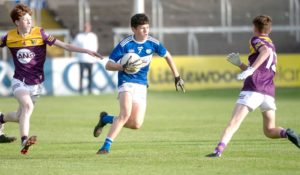