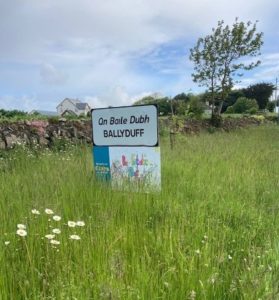 This Ballyduff is over a hundred miles away

BEFORE I embark on a cycle, I will usually consult one or other of the weather forecasting apps on my phone. I’m not quite sure why I do it, because, by that stage, I have pretty much decided to go anyway. If I am starting out from home, one of the apps insists on telling me I am in the townland of Ballyduff, whereas I am actually in the townland of Killeen. However, I tend to forgive the location technology gurus, as Ballyduff starts just a hundred yards north of me.

I’m not sure if the weather forecasting algorithms do any head scratching, but I certainly gave them cause to last week when I cycled through the townland of Ballyduff – not the one next door to me though.  This Ballyduff is over a hundred miles away, and you will pass through it if you are travelling from the North Kerry village of Causeway to Ballybunion, as indeed I was.

Let me explain. Every May in our household, the stark reality of a badly divided world is visited upon us. For my other half, May is often her busiest month, when she plies her trade visiting educational establishments, often in far flung places. My role in these endeavours is to act as chauffeur. Considering that once I drop my charge at the designated location in the morning and am free to do as I will until evening time it’s not the most onerous task. While herself has her nose to the grindstone, ground coffee is as close as I come to that state.

When Kerry appeared on the radar for this May, and reasonable weather was a possibility, I decided to throw the bike in the boot. On an overcast Monday morning, having dropped my charge in the village of Causeway, I extricated the bike and consulted the map. Ballybunion, at ten miles away, was within striking distance and the sky seemed to be clearing in that general direction. I was also curious to see what changes might have occurred since my last visit to the town, when, in the summer of 1975, I accompanied two former winners of the Bachelor Festival to sample the atmosphere of that year’s event.  At that time, the atmosphere came in a pint glass and we did indeed sample as much as we could of it. I can’t have been too bad though as, 47 years later, I managed to find the Marine Hotel (where we briefly laid our heads on that occasion) without the aid of Google maps.

On the way to Ballybunion, about five miles from Causeway, my antennae began to twitch as I cycled through the town of Ballyduff. My interest was piqued – not just because of our neighbouring  townland in Laois – but I remembered a tour group from Ballyduff visiting Co Laois a number of years back, and their  principal focus was tracing their Co Laois origins.

Remembering that visit,  I peddled along and managed to dredge up enough recollection to be able to take stock of my surroundings and to plan a couple of cycle routes for the days ahead. In the days that followed, I visited the towns of Listowel and Tarbert and, while in Tarbert, I peddled into Co Limerick to visit the nearby town of Glin. I also took stock of Ardfert and Abbeydorney, and passed through innumerable townlands. The common denominator for almost all of these places is that, at one time or another over the course of 400 years, much of these lands were worked by people who had their origins within the seven septs of Laois, and their followers.

Potted histories are, by their nature, flawed affairs. The best you can say is that you are spared a longer and not necessarily more correct version of events. But we do need to come up with some explanation as to why, in North Kerry, the Moore, Lawlor, Kelly, Dowling, Deevy, Doran and Mc Evoy surnames are present to this day. And if you want proof that these are the names of the seven septs of Laois, just take a spin into Portlaoise and you will find various roundabouts in the town bearing these names, or close derivatives of them. You will find an ‘O’ in front of most of them, meaning, of the family of.  O’Kellys would be an example.

So how did the septs of Laois end up in Kerry? Well, let’s not go back any further than the death of Henry VIII in 1547. Around that time, English influence in Ireland didn’t stretch much beyond The Pale, and that was shrinking. It stretched along the East coast from about Bray to Dundalk. Inland,  it didn’t go much further West than a North/South line through Trim in Co Meath and Naas in Co Kildare. Outside the Pale, it was pretty chaotic. The old Gaelic tribes of both Laois and Offaly were a pretty warlike lot and a nightmare for the English settlers within the Pale. Raids into the Pale were commonplace and, where they weren’t raiding, you could be fairly sure they were extorting money or kind. Game of Thrones could learn a thing or two from these lads.

By the time Mary I acceded to the throne, the Crown had had enough. The only way they could establish any kind of security within the Pale was to plant the bordering counties. Hence, the shire lands of Queens County (Laois) and Kings County (Offaly) were created. Interestingly, Mary I was only on the throne for five years (1553-1558) but her county endured from 1556 until 1922.

As plantations go, the plantation of Queen’s County was not a roaring success. It was militarily under-resourced, depending largely on the landlord training his tenants in the use of arms, and expecting them to subdue seasoned warrior tribes. There was patchy success where lands were granted to hardened military men, whose militias were themselves battle hardened. But this was the exception. For the septs of Laois, it was business as usual, and this would bumble along for nigh on half a century, until the arrival, in 1600, of Lord Mountjoy and Sir George Carew, Lord Deputy and President of Munster respectively.

Now, if ever there were two lads who knew what they were at, it was this dynamic duo. Both ruthless men. They immediately initiated a scorched earth policy and systematically cut down growing crops, ploughed root crops into the ground and killed cattle, deliberately creating famine in their wake. When they cast their eye on Laois, they reaped and unexpected dividend when, arguably its greatest warrior chief, Owney O’More, was killed in a skirmish near Slieve Margy, reputedly reacting to a report of homesteads being razed in that area.

The defeat of the Gaelic Nobles at the Battle of Kinsale in 1601 was the defining event for this period of Irish history. So what happens after a defeat of this nature? Do the vanquished submit, down weapons and hope for the best? Not really. The victor needs to make some gain for his trouble, so deal-making becomes the order of the day. For deals though, you need brokers and fixers and chancers and everything in between.

Enter one Patrick Crosbie and his brother John. From whence they came was anyone’s guess. But if Mountjoy and Carew were the masters of scorched earth, Patrick Crosbie was their equal when it came to brokering deals and fixing the unfixable. And everywhere he brokered a deal favourable to the Crown, it was as likely to have been just as favourable, if not more so, to Patrick Crosbie.

By 1607, Patrick Crosbie and his brother John held extensive estates in Kerry. John had been made Bishop of Ardfert in 1601, and much of his lands derived from that position. Patrick’s lands are of less certain origin, but between them they were the biggest landowners in Kerry. Patrick also held significant lands in Laois. About this time Patrick Crosbie made an extraordinary proposal to the Crown. Simply put, if they would give him land in Kerry, around Tarbert, he would guarantee that he could get the leading members of the septs of Laois to move there. Basically, the Crown said, fair enough … but if they come back, they will be killed.

What happened next was an agreement was signed by the seven septs of Laois at O’Lalor’s Mills (not far from Portlaoise) on St Patrick’s Day 1607. The agreement set out the terms under which they would go to Kerry and lists 289 sept family members.

Was it all that simple? No, is the short answer to that. The long answer, I couldn’t possibly squeeze into this page, or, indeed, into the entire paper. Others though, have tried to answer this question, one of whose publications I came across in a bookshop in Listowel. Michael Christopher Keane penned a volume in 2016 titled From Laois to Kerry which is worth a read.

As for me, I have chauffeured herself back to Laois and I am back in the townland of Killeen, next door to Ballyduff (from whence my weather comes) and I’m staying put for now.

Until the next time, stay safe.