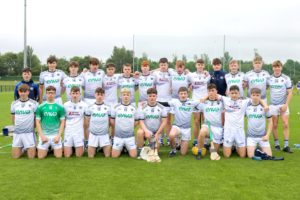 A SECOND-HALF goal from Brandon Rossiter broke the Laois resolve as Wicklow were crowned Celtic Challenge champions on Saturday afternoon in Abbottstown.

Laois had made a remarkable comeback last weekend to bring this game to a replay and this week’s game was a far better performance.

Both sides weren’t willing to give much away early on and it took until the sixth minute to get the game’s first score when Oisín Smeaton pointed to put Laois on the front foot. Wicklow responded well as Willie Cash pointed from play while also tapping over a free.

Laois then hit a purple patch as they raised four white flags without reply. Two super scores from Will Duggan along with a free from Eli Quinn and a point from Seán Óg Byrne put Laois in command early on.

The remainder of the first half was nip and tuck as each side pointed three times. A 65’ from Michael Óg O’Neill put two between the sides. Lorcan Dunne got another score for Laois with O’Neill replying with another placed ball. Jordan Downey finished the half with two points in succession before Johnno Moorehouse split the posts.

Laois held a three-point lead at the break and were well worth their lead. They had Rick Bannon to thank for the gap as he had saved a certain goal when Moorehouse fired low to the bottom corner. Laois’s defence in the first-half had performed superbly as on one occasion, Ryan Peters made a crucial block to prevent Wicklow getting in for a goal.

Wicklow started the second half with power and pace as two frees from O’Neill closed the gap to a single point. The game’s next score was the most crucial as Rossiter got to the ball before Bannon and kicked the ball into the net.

Laois responded well to this setback and fired over two unanswered points to level the game. Downey pointed for the third time while Quinn fired over a 65’. Riain Waters and Eli Quinn (free) traded points as it looked like the game would end as a draw for the second weekend in a row.

Laois thought they had raised a green flag but somehow Wicklow keeper Tristan Doherty got down low to save Downey’s effort that looked destined for the bottom corner.

Wicklow ensured the game would not go to extra time as Rossiter took his tally to 1-2 with two points from play. The game ended with Cash pointing for the third time.

Laois pushed late on to try and get a goal to level the game but Wicklow centre-back O’Neill was man of the match as he caught ball after ball to make sure Wicklow would get the win.

Although Laois left without any silverware, it wraps up a successful year for underage hurling in Laois following on from the minor hurling team reaching the All-Ireland series as well as a Leinster final.