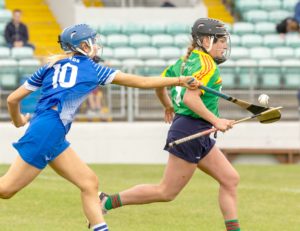 HAVING contested the Leinster final the O’Moores have had a very disappointing few weeks losing their opening three games in the All-Ireland championship following the loss to Meath in the provincial final.

They lost their opening game in this campaign when going down by eight points to Galway. Their next two saw something of an improvement but still losing, by five points to Kerry and by four to Dublin.

Hopes would have been high heading to Netwatch Cullen Park on Saturday to take on a Carlow side who also had very disappointing start to their season. Heavy defeats to Galway and Westmeath as well as a narrow loss to Kerry could have their broken spirits. That didn’t happen. They put those disappointments behind them here and were worth every bit of their three point victory.

The eventual winners got off to the better start with Ciara Quirke converting a sixth minute free. Eimear Byrne followed up with a long-range score as Eleanor Treacy also raised a white flag. Quirke tacked on a point from play before Laois got off the mark with an Aimee Collins score.

An away comeback looked a possibility when Kirsten Keenan added a Laois point in the second quarter but Carlow hit back with efforts from Katie Garry Murphy and Rebecca Kelly. Laois had a third point from Collins to leave the home side leading 0-7 to 0-3 at the interval.

On the restart, Kelly raided down the right at the scoreboard end of the ground and picked off a point from a narrow angle but another Collins score ensured Carlow could not build up momentum. Jesse Quinlan was also on target to narrow the gap to a goal.

Carlow dug in from there. Kelly added a point and Eleanor Treacy backed herself from about 30 metres when she went for goal. It was the kind of shot which should have been dealt with but the ball bounced up from the hard ground and spun out of the grasp of keeper, Aedín Lowry, finding its way into the back of the net.

A hard-earned point from Quirke extended the lead to eight points and with just over 15 minutes to go, this was a game which was Carlow’s to lose. It was a case of grinding it out once more.

They were never going to dominate for the entire half and Collins and Quirke exchanged scores. Aiva Coss scored another Laois point and they got a huge lift when a speculative effort from Grainne Delaney crept just inside the left-hand upright for a Laois goal.

Gemma Hoare added a point to leave only three in it. There was plenty of time left for the visitors to complete the comeback now. Especially when Clodagh Tynan converted a long-range free.

But now the Carlow defence stood up and were counted. The home attack complimented that effort when Eimear Byrne gathered possession just inside her own half. Spotting Ciara Kavanagh ghosting down the left, the pass was perfect. Kavanagh gathered cleanly, ran a few metres and found the net with a brilliant shot to the top right hand corner.

At that stage, it wasn’t quite a match winner but it was a vital strike. Coss scored two points for Laois with Collins also pointing. The lead was only two with a minute to go.

Carlow were not going to be denied. A long ball out of defence was plucked out of the sky by right-half back, Emma Cody. She galloped forward without a hand being laid on her. From half-way she let fly and the sliotar flew over the bar.

With time ebbing away, that score broke the Laois challenge and Carlow held out for a most satisfying victory.