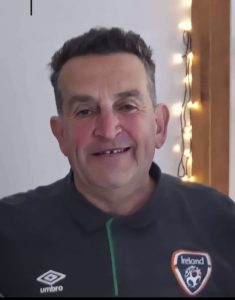 GERARD (Gerry) Heary, Sleaty Street, Graiguecullen, whose death occurred at his home on Friday 27 May, had managed a heart condition for the last 16 years of his life. Gerry was aged 68.

A native of No 16 Granby Row, Carlow, Gerry suffered a heart attack in 2006, followed by a stroke, and from that time had been treated for his condition in a number of hospitals. He was a patient at Dublin’s Mater Hospital for a month before coming home to Sleaty Street for his final days.

Educated by the Christian Brothers in Carlow, Gerry left school at an early age to go working with local painter and decorator, the late Frank Slattery. He gained an excellent reputation for the quality of his work, reflected in the many tributes paid to his painting and decorating by satisfied customers and by the number of people who went back to Gerry for the repeated use of his work skills.

Having worked for a long number of years with Frank Slattery, Gerry went out on his own and, in private enterprise, he proved equally successful with many loyal customers. His illness forced Gerry to give up work, much to the disappointment of his many clients.

From his childhood, Gerry had an interest in pigeons and he always kept homing pigeons in the loft behind the Heary home. As a member of the Carlow Pigeon Club, Gerry drove the club’s pigeon truck to many locations in Northern Ireland, England and Scotland over the years. The pigeons would be released at locations in these countries and make their way home to lofts all over Carlow.

Even though he ceased being involved in pigeon racing a number of years back, he still kept some pigeons as a hobby and was a great mentor and help to his oldest son Keith, who now carries on the tradition of breeding and racing pigeons competitively.

Gerry had a great love and keen interest in gardening and expressed a wish to be able to enjoy his own garden, which he spent much time in, before his passing.

Although he never played competitive sport, Gerry was an avid follower of all Carlow GAA teams down the years.

He was a life-long supporter of Chelsea FC, though he never made it to Stamford Bridge to see ‘The Pensioners’ play in the flesh.

Before illness struck, Gerry’s ‘local’ was Bradley’s of The Thatch in Graiguecullen. He was one of the ‘Monday Night Club,’ men and women, who would gather in The Thatch for a sing-song.

In latter years, he enjoyed going to Graiguecullen Parish Hall as a volunteer for meetings of the Graiguecullen men’s and women’s choir and also The Ladybirds club. Gerry would help set up the hall and make the tea for those meetings and he greatly enjoyed the craic with members.

Indeed, Gerry Heary was a personable man who could extract a life story from anyone he engaged in conversation, whether or not he knew the individual. A quick wit and a man of great humour and jokes, he was a big fan of Brendan Grace and saw himself as somewhat of the Grace fun character ‘Bottler’.

He was a dedicated family man whose passing has created a huge void in the lives of his wife, children and siblings. Gerry was married to Valerie Cleary from Ballygowan, Milford – they wed on 30 April 1977 in St Fintan’s Church, Ballinabranna. The couple met at a dance in the Ritz Ballroom, Carlow.

Gerry fulfilled a personal wish to attend his son’s wedding in Kilkenny on 16 April, just days before being admitted to hospital, to see Peter marry Deirdre Hennessy from Kilmallock, Co Limerick.

He reposed at home on Sunday 29 May, with prayers being led by Fr John Dunphy, PP, Graiguecullen-Killeshin. Fr John celebrated Gerry’s funeral Mass on Monday morning in St Clare’s Church, Graiguecullen, when readings were by his son Peter and long-time family friend Avena Lennon.

Members of the Heary family recited the Prayers of the Faithful, while the Offertory gifts were brought forward by Gerry’s brothers Jimmy, Michael and Noel.

Keith, Gerry’s son, provided a lovely, fitting tribute to the life and times of his dad in a eulogy.

The combined Graiguecullen men’s and women’s choirs sang the hymns during Mass.

A Carlow GAA flag was placed on Gerry’s coffin.

Following Mass, Gerry was laid to rest in St Mary’s Cemetery, with Fr Dunphy reciting the final prayers at the graveside.

He was predeceased by his sister Kathleen Farrell (Fenagh, Carlow) and Eva (Granby Row, Carlow).

Gerry is also survived by his grandchildren Patryk and Brian, daughters-in-law Magdalena and Deirdre, by his brother-in-law, sisters-in-law, nephews, nieces, relatives and friends.