Ciaran Doyle set out three weeks ago to run four Park Runs every Saturday morning in memory of his late wife Eilish and to raise funds for the Irish Motor Neuron Disease Association. 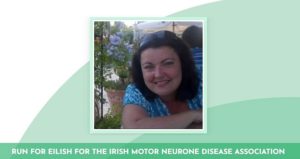 In November 2017 Ballylinan woman Eilish Doyle was diagnosed with Motor Neurone Disease and lived with the disease until 8 April this year when she sadly passed away surrounded by her loving family at the age of 53.

Eilish was the beloved wife of Ciaran who, following her passing, decided to take on a four-Park-Run challenge to help raise funds for the Irish Motor Neuron Disease Association.

He set up an iDonate fundraising page with a target of reaching €4,000 – which has since been surpassed.

In his appeal to people to donate Ciaran said: “Eilish was the single most extraordinary person I have ever met. We shared our life’s passions – our three beautiful children, our love of music, books, travel and many beautiful memories. Eilish was as Eilish always said the ‘measure of my dreams’

“We made the most of the last four and a half years and could not have done so without the huge help of Eilish’s sister Trisha, her mam Mary, our families and Eilish’ many friends.”

Ciaran said: “The help, support and assistance of the Irish Motor Neuron Disease Association (IMNDA) was critical to Eilish maintaining her independence and communication. Without their help we would have been lost. They gave us the tools to keep going. They were always there to help, and we never waited for equipment, support or advice. They gave us a supporting hug on our worst days.”

He pointed out that approximately 90% of the IMNDA’s funding comes from fundraising and donations.

“To that end on behalf of my late wife Eilish and our family, I would, with your help like to give a little back to keep other families going who are living with this cruel disease. Motor Neurone Disease is a life limiting disease. We always have hope that advances in medical science will soon find a cure.

Ciaran said: “I plan to keep it very simple. I have been a participant of Parkrun for a number of years. Park Runs are a timed 5km walk, jog, run which take place in over 100 locations around Ireland at 930am every Saturday morning. Parkrun is a positive, welcoming, and inclusive experience where there is no time limit, and no one finishes last. Everyone is welcome and there is always a cup of tea, a bun, a chat, and a laugh after every event.

“My goal is to finish four Park Runs in Eilish’s memory to raise some vital funds and awareness for Motor Neurone Disease (MND).

“I plan to run, with a little help from family and friends, four Park Runs to fight MND and finally victory over this cruel disease. I am choosing four locations to represent the capital letters of the acronym MND – Mullingar – Nass – Donabate and to his home Park Run in Vicarstown.”

Ciaran has since completed the first three Park Runs and will complete his challenge this coming Saturday at 9.30am along the Vicarstown Park Run.

He said: “It would be great to see a few familiar faces on the final run in my Parkrun home of Vicarstown on Saturday 25 June.

If you can’t get along to cheer Ciaran over the finish line you can donate to his fundraiser by logging on here and make a contribution, however small.