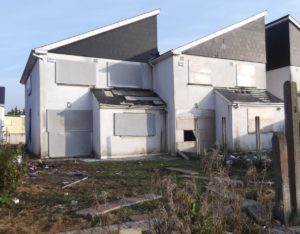 54 modular homes have been approved for the now derelict housing estate at Hepburn Court off the Ballyfin Road in Portlaoise.

Councillors at their meeting today (27 June) agreed to proceed with the construction of 54 modular (pre-fabricated) homes on a near demolished housing estate in Portlaoise.

They gave their approval to council management to proceed with a voluntary housing body to draw up plans for the houses on the 2.4 hectares site at Hepburn Court, off the Ballyfin Road.

The former 12-house private estate was built in 2004. Over the years hundreds of thousands of euro damage was caused to the houses by anti-social activity and thousands of euro spent by Laois County Council in tackling fires in it and cleaning up mounds of domestic rubbish from it.

A number of families were forced to move out of the houses and the estate is now lying derelict and abandoned with a small number left to be demolished.

Director of Services at the council’s housing department Angela McEvoy said what is proposed for the site is the construction of eight single bed, 12 two bedroom and 34 three bed houses.

Cllr Caroline Dwane Stanley proposed that the council proceed with the plans, while cllr Thomasina seconded the proposal.

*Modular homes are houses pre-fabricated and built off-site. They are completed in sections called modules. The sections are transported to the site where they are assembled and installed into the foundations.