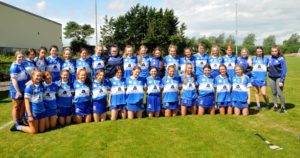 The Laois team which overcame Carlow in the Tesco All-Ireland U/16 ‘B’ Camogie semi-final on Sunday at Hawkfield Photo: Martin Rowe

NEAR neighbours Laois and Carlow made the short journey across to Manguard Plus Hawkfield in Newbridge for the semi-final of the Tesco All Ireland U16 B camogie championship on Sunday.

Those present were treated to a tremendous game between two evenly matched teams. We also witnessed a superb performance from Laois full forward Kaylee O’Keeffe who hit 2-7 of her side’s total and all from play.

It was Carlow who were quickest out of the traps and early points from Sarah Sheehan and Clodagh Lawler had them two up after six minutes. Kaylee O’Keeffe opened her and Laois’s account after nine minutes before Leah Ryan restored Carlow’s two point advantage with an excellent strike on the run.

The second quarter was all about Laois as they outscored their opponents by 2-4 to 0-2. Sinead Slevin played a long ball to Kaylee O’Keeffe and her ability to round Niamh Treacy saw her through on goal and she shot low past Aoibheann Dowling.

Carlow broke down field from the restart and Laois keeper Mia Henderson was called into action to make a great save from Molly Kavanagh’s goal-bound effort. Sarah Sheehan reacted quickest to register Carlow’s fourth point

Caoimhe Cuddy pointed but it took another 10 minutes before Kaylee O’Keeffe registered the next Laois score. Defences were on top in that period with both goalkeepers being called into action but they didn’t shirk their responsibilities.

Laois finished the half the stronger. Points from O’Keeffe and Aimee Byrne came either side of O’Keeffe’s second goal on 26 minutes. This time she had team mate Aoife Daly to thank for a sweet pass and she made no mistake to leave it 2-5 to 0-5 at the break.

On their return Carlow knew a bright start was required to get them back in the game and they didn’t disappoint with a goal and two points before the 40th minute.

Roisin and Sarah Joyce opened the Carlow account with points and despite a Kaylee O’Keeffe white flag for Laois it didn’t deter Carlow. When Leah Ryan found Sarah Sheehan she gave Mia Henderson no chance with a great shot and the six point gap was suddenly back to three.

Laois were dependent on Kaylee O’Keeffe for scores and before the 46th minute she had hit three in a row to extend the lead back to six.

Carlow in fairness worked their way back into contention for a second time. As Leah Ryan bore down on goal she offloaded to Roisin Joyce and her shot was well saved by Mia Henderson but Sarah Sheehan was on hand again to scoop home the rebound.

The hard working Lucy Conroy settled Laois nerves with a 40 metre point but Clodagh Lawler converted a free to keep the gap at three.

In the closing three minutes Laois keeper Mia Henderson was called into action on two occasions to keep their lead intact. With time almost up Aoife Daly secured the Laois victory with a lovely score off her left hand.

Referee Barry Nea brought proceedings to a conclusion in the 64th minute and Laois were on their way to an All-Ireland final where they will take on Antrim.