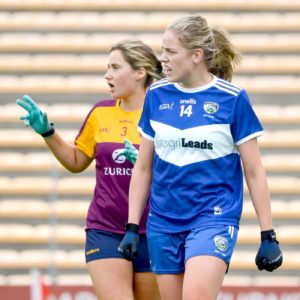 TO say Sarah Anne Fitzgerald appearing in Sunday’s All-Ireland final is something of a fairytale might a little but of an exaggeration, but not way off target. Just over two years ago Sarah Anne decided to bring down the curtain on her inter-county career, but that was playing camogie.

And now she finds herself heading to Croke Park Sunday to represent her county in an All-Ireland final, but this time in football.

“To be honest, I never had any intentions of playing county football. I’d dreamed of being in an All-Ireland final but that would have been in camogie. I had retired from camogie at the start of 2020 and I went back playing club football.

“Then pandemic hit and we eventually ran our club championship and then Donie rang to see would I come in and I said ‘why not’. I went in and really enjoyed it and then got another phone call in January for the 2021 campaign and it’s been a roller-coaster since. I thought these days were behind me but I’ve really, really enjoyed it,” she said.

Being in the Centre of Excellence on Wednesday signbing autographs had something of a surreal feel to it.

“Hopefully we came repeat 2001. We really want to get Laois back up playing senior football. We should be there given our history and tradition in ladies football but wanting to be there and getting there are two different things.”

Sarah Anne and Laura Marie Maher are the only ones to have had the experience of playing in Croke Park in the camogie All-Ireland final. Will this be of benefit to them or might the experience overawe some of the younger girls?

“Donie always says before every game that there’s no point in getting nervous, it is just another game. We’ve all played in big games, I know no bigger than Sunday, in county finals and the likes where the pressure has been on us too. It’s easy say that too but once you get out there and get you’re hands on the ball everything else goes out the window.

“You can’t be naïve either. You have to embrace it, take it all in, at the end of the day it is an All-Ireland final.”

So what is so special about this team, this group of girls?

“We get on really well together. We enjoy each others company. We haver great craic at training and that’s the key to a lot of what we’ve achieved. We drag each other along but have a good laugh and banter at the same time.

“Everyone in the group are down to earth girls, there’s no egos. A lot of the girls have been playing together right up along from underage up to now.

“A lot of us would be in or around the same age, but the younger ones keeps us older one honest, keep us on our toes.”

So what of Wexford? Laois record against them in recent games has not been the best.

“In last year’s All-Ireland semi-final they were full value for their win, they were definitely way better than us. That game just went by us in a whirlwind and was over before we knew it.

“This year in O’Moore Park in the Leinster final, just a few weeks ago, it was just crazy. I went home that evening and asked myself what had happened. We couldn’t peace it together ourselves.

But both teams are at very different places now and hopefully we’re going to peak at the same time.”

And how would Sarah Anne sum up Donie Brennan?

“I’d say people at matches are saying this lad is mad but first and foremost he is a player himself and he knows what players want. And he knows what it takes at county level.

“He’s brought standards to a new level. He’s brought back a sense of pride into the county jersey. Laois was in a low, low place when he took over and he has turned things around dramatically.”