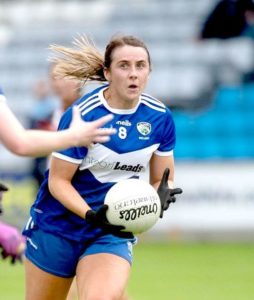 Anna Healy says she would play in any position just to wear the Laois jersey Photo: Denis Byrne

IT not very common to hear a player in any code relishing the task of having to spend the day running and running. But one such player is Anna Healy.

Last year Anna’s was playing as a half back but this year has been converted to midfield. So how does she feel about that?

“It’s funny actually because last year I used to wonder ‘am I a back or a forward’. To be honest if I was to have the choice I would pick midfield. It’s my most natural position because, I’d say of myself that, I’m not the most natural footballer but I can run. But then again, I’d played anywhere to get my hands on a Laois jersey.

“I do enjoy midfield and the running. You can build yourself into the game. And myself and Jane (Moore) have built a good partnership but I wouldn’t be resting on my laurels that that would be the partnership the next day because there is so much competition for places within the squad. Every training session is a pure battle field.”

And it is that midfield partnership that has typified a lot of how Laois have achieved what the y have – that never say die, never lie down attitude. In the All-Ireland semi-final defeat of Clare, Laois came close to undoing all their good work. But with Anna and Jane leading the way from the middle of the park they held out.

“We never make it easy, do we. It was such a tough game especially when it went to extra time. We just had to think back to all those tough runs we did back in November and December and say to ourselves if we could do that many back then we can pull a few more out of the bag here today.

“When you know what is at stake you’ll always find those few extra yards. The crowd that day too. Every time someone made a block or Mo kicked over a point there was such a cheer, that would give you that bit extra in the legs.”

And of the turn out at their meet and greet evening, Anna was just stunned.

“We’re thrilled that such a huge crowd turned out. It’s absolutely brilliant to see so many young girls and boys here this evening, I suppose it’s something for them to be looking toward, to see what can be achieved down the line.

“We’re so excited about playing in Croke Park but at least we had a three week break between the semi-final and final, so we could enjoy it a bit. We’ve had a bit of time to relish the experience and build up but after tonight we will really put the heads down and concentrate of the match.”