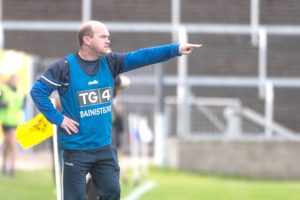 THEY turned out on force in the LOETB Centre of Excellence to meet and greet and support the Laois ladies who will be heading to Croke Park on Sunday where they play Wexford in the All-Ireland Intermediate final.

This is the first time that a Laois ladies team have made it to headquarters to contest and All-Ireland final since the 2001 final when the Laois girls brought home the All-Ireland title.

Some thought they would never see that day again but this latest team has improved in leaps and bounds under the guidance of manager Donie Brennan, and he spoke with the media on Wednesday evening.

Donie was absolutely astounded at the numbers that had turned that evening to support the team.

“It’s huge. It’s great for every young girl playing club football in Laois and playing in development squads that can see what’s possible. If they put in the hard work, win a few matches, and get involved and it’s great to be part of this; not just to be part of the panel, but you can see the wider community and the support that’s generated from winning,” said Donie.

Laois have progressed very nicely this year and have notched up some cracking scores. And while the semi-final defat of Cl;are was a very close affair Donie acknowledged that their scoring exploits have been impressive but that the Wexford mentors will have studied them.

“Teams are trying to figure out how they’re going to stop us from getting these goal chances,” said Brennan. “The last day, Clare did create more chances than us but we were more efficient in our chances. Semi-finals are hard won and Clare were super on the day and luckily we came out and we’re going to have another battle on Sunday.

“The big thing is to create the chances and hopefully we can get the right player on the end of those attacks. If we do, well and good, or whoever gets there will just have to take their best shot. And that’s what we encourage: if you get in there, you have a go and we’ll be going for chances. We’ve 60 minutes to go out and score as much as possible and that’s the aim. From the first minute to the sixtieth minute we’ll be trying to put scores on the board.

“The big thing about this team and the teams I like to play football with is that we like to have a go. We’ll have a go. We will leek a few chances but if we played with two sweepers or one sweeper we wouldn’t score (as much). We won’t be going out to sit back. And the girls love that as well, they love that environment we can create. We’re going to Croke Park and we’re going to have a go and we’ve 60 minutes to score more than Wexford.”

Over the past decade or so Laois had seen it’s position in ladies football drop down the ladder but under Donie guidance their fortunes have taken a turn for the better, although Donie takes no credit for that.

“When I took the job, I had my ambitions and that would’ve been for the girls to play senior. We’ve turned it around, we’ve gotten girls back in who were missing and we have a close knit panel now. I couldn’t ask any more of them; they’re hugely committed.

“And the main goal for this team is to be playing senior football let it be next year or the year after or the year after. It’s about getting these girls to play the best teams possible and achieve their potential.”

That ambition is not going to be easily achieved. Between Laois and that senior status stand a Wexford side who have had the measure of the local girls in recent meetings. Wexford beat Laois in last year’s All-Ireland semi-final and earlier this year beat Laois in the Leinster equivalent.

Donie knows this is going to be a tough assignment but is confident hos charges are up to the challenge.

Wexford had the measure of us the last few times, but we are where we are and we are where we wanted to be. There’s no point talking about what happened last year or the year before or the year before. It’s all about the next game or the next ball. Sunday is going to be a huge day for the girls and the one thing that we池e trying to focus on is that they do themselves justice and the day doesn’t pass them by and they are well focused for the game.