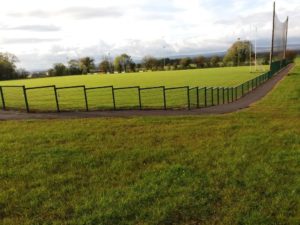 The incident happened on Friday 15 July, when Trumera and St Lazarian’s Abbeyleix contested the opening round of this year’s Premier Intermediate Hurling Championship.at Colt GAA grounds in Raheen

FOLLOWING a racist incident at a club championship hurling game in Laois, a GAA club has taken a firm stance and banned a member.

During the game, which was played in Colt, a Trumera supporter was heard to shout a racist remark at one of the Abbeyleix players. His comments surprised and shocked those who heard them.

The Trumera club was subsequently made aware of the incident and made the decision to take immediate action.

A spokesperson for the Trumera club told the ***Laois Nationalist***: “That was dealt with the following night. The match was on the Friday night, dealt with it on Saturday night after we called an emergency club meeting. The person in question has been suspended for 48 weeks and he has been notified of the suspension, which is the maximum for which you can suspend someone for bringing the game into disrepute.”

It is now expected that the decision will go before the Laois County Board, where it is bound to be discussed.

The spokesperson accepted such behaviour cannot be condoned and he said the club would never defend any person who became involved in such actions.

Unfortunately, this is the second racially-motivated incident to have occurred in the area inside 12 months. In July last year, an under-17 soccer match between Abbeyleix AFC and Mullingar Athletic B at Fr Breen Park had to be abandoned because of alleged racist remarks.