A quirk of fate on an emotional day 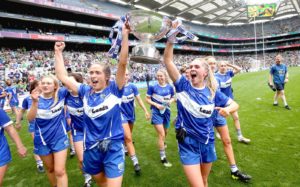 FOR Laois it was not just their first appearance in Croke Park in 21 years, but Sunday was also the first time Laois and Kerry had appeared in Croke Park on All-Ireland final since that memorable day back in 2001.

That day Laois came away for Croke Park as champions while Kerry faced a long road home trying to figure where it has all gone wrong.

On Sunday evening were had a similar scenario, albeit in different finals, Laois winning and Kerry losing the intermediate and senior finals respectively.

I make no bones about it, yesterday’s game was an emotional occasion for this scribbler, and probably for those who were lucky enough to have savoured both Laois victories all of 21 years apart.

Probably the greatest similarity between the two finals was how the Laois girls put their supporters through an emotional wringer, and took them on a nerve wrangling roller coaster ride.

In 2001 it went down to the wire and it was Laois who had to come from behind and did so thanks to Mary Kirwan’s injury time free. On Sunday it was no easier on the nerves but as Wexford clawed their way back into the game in the dying minutes, oh my god.

I know no manager likes to single out any individual player, or even particular positions, but Donie Brennan was spot on to highlight the role his defence played on Sunday. To say it was heroic would be an understatement.

All year we have been writing and reading about exploits up front from the likes of Mo Nerney, Erone Fitzpatrick, Emma Lawlor et all, but I am sure they will take no offence that the spotlight this week is shining on the other end of the pitch.

Talk about playing a captain’s role, Aimee Kelly was simply outstanding. And in the other corner Clodagh Dunne almost played herself to a stand still. And for the player of the final award to go to a defender is that bit unusual but that the award went to full back Aisling Donoher speaks volumes for this defensive display.

But it seems almost unfair to highlight any player or sector because in truth each and every one of the 15 that started and the three subs that came on, and the subs that never got to play, can all take credit for this achievement.

They have put in the hours, put in the hard graft, in fine weather and foul, but always in the belief that they could get to play senior football.

To each and everyone involved, a huge thank you from all Laois supporters, young and old. I just hope some of the young supporters do not have to wait another 21 years for a day like Sunday.