Camogie girls make it Lovely Laois on the double

Tesco Camogie All-Ireland U/16 ‘B’ Final 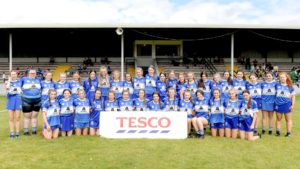 The Laois team prior to the Tesco All-Ireland Camogie U/16 ‘B’ Championship final against Antrim in Drogheda on Sunday Photo: INPHO/Cathal McOscar

JUST as Laois fans were singing ***Lovely Laois*** in Croke Park as the captain made her way up to the Hogan Stand to receive the Quinn cup, 50 miles up the East Coast in Keirins O’Rahilly Park in Drogheda, the final whistle was sounded after Laois had beaten Antrim in a thrilling All-Ireland camogie final.

Laois got the dream start here scoring a brace of early goals by Kaylee O’Keefe and Aoife Kirby who added a point. They kept their own goal intact until a minute into first half injury time.

Laois added three more points and just before the break a good move by Laois looking like scoring a third goal, but Aoife Kirby settled for a point.

From the puck out an Antrim forward Judy McIntosh got past two defenders to scoop the ball over the line. Laois went down field in search of a goal instead the Antrim keeper made a fine save and the Laois forward picked up a yellow card for her efforts.

At the interval Laois were clinging to a narrow lead 2-4 to Antrim 1-5.

That late goal should have boosted the girls from the Glen, but it was Laois who returned more determined to restore their cushion of five points. Within minutes they had struck for their third green flag. This time a long ball in from midfield fell kindly for the Harps sub Aoife Gee and she blasted to the net from close range.

This dented the Ulster champions and although Laois found it difficult to add on points, their defence led by Ava Guilfoyle and Lucy Conroy were outstanding.

Antrim enjoyed a great spell but many good moves were denied by the Laois keeper Mia Henderson. Similarly Lucy Conroy defied the Northern girls time after time and in a rare saunter up field, the Harps player showed her class beating the defence for her second goal midway through the half.

Laois looked safe now but were dealt a double whammy. First Antrim broke through for a third goal that was hotly contested.

With 13 minutes left a controversial incident resulted in a Laois forward being issued with a straight red card by the Derry referee. The Laois mentors protested but in vain.

Laois were later awarded a free close to the side line and calmly the Naomh Eamon half forward Amy Byrne squeezed the ball between the uprights to leave the O’Moores back on top by three points with five minutes to play.

It was now the Laois defence showed their determination and resolve but they had to be disciplined. They hurled magnificently and the subs that came on added a freshness because conditions were very clammy. Five minutes was announced for added time and a player down was a real test. But six and a half minutes of injury time brought an end to a thriller.

All this was achieved without their vice-captain Katelyn Shore of Naomh Eamon who picked up a serious injury against Kildare. But she was able to travel on Sunday and join in the celebrations. Kaylee O’Keefe was the other joint captain and they were presented with the All-Ireland trophy to complete a wonderful days sport for the O’Moore County.

And throw in the Laois connection with Meath ladies, Emma Duggan, and the O’Moores had an interest in three All-Ireland winning teams on the last day of July.

Finally, a feature of the Laois team was the number of girls from the smaller clubs in the county and this success can only bring on more young talent. 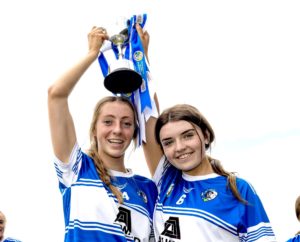