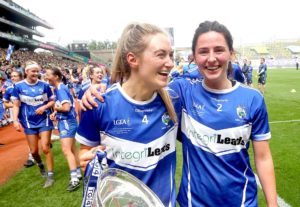 YOU might haver thought that by the time the Laois captain, Aimee Kelly, got out to talk to the media that the enormity of what the Laois team had achieved would have sung, but not the least.

“It feels absolutely unbelievable. It hasn’t sunk in yet. At the moment it’s just like a dream, the team are buzzing,” said Aimee.

“Yeah, there’s some buzz and I’m sure over the next few days it is going to be even better. It’s just an incredible feeling. We’ve never played in front of so many people in place like Croke Park. That’s a thing of dreams.”

Going on the display of the team and their never say die attitude, Aimee must have been extremely proud to have captained such a group of players,

“I am extremely proud of the girls. They have given so much commitment over the last year, even a couple of years. It’s so hard training three and four nights a week, so we deserve our bit of success and I’m just so happy for the girls.”

There is no denying that many supporters were that bit worried at half time. Fair enough Laois held a nine point lead but had kicked a string of wides and would now be playing into the wind. Was Aimee ever really worried?

“I don’t think we were ever worried. Yeah, there were a few nerves, most of the girls never played in Croke Park, so it was a totally different sort of environment. We were creating chances. We were completely on top. We knew at half time that Wexford were going to come and be a different team but our message was simple to never give up and keep playing.”

But what of the final few minutes when Wexford were piling on the pressure, what were her feelings then, especially being a corner back?

“I’m not going to lie I was looking at the clock, praying it would go down quicker. Wexford are like that and we knew would have to be resilient and try and keep them out from the goals and I think we did that well. I know it’s only two points in the end but we managed and that’s what we wanted.”

And what about the man of the moment – Donie Brennan?

“Look, Donie’s been incredible since he came in. He takes no nonsense. He wanted us to play senior football and it was just about how we would go about it. We had that belief and we’re here now.”