Old fashioned is best as far as Donie is concerned 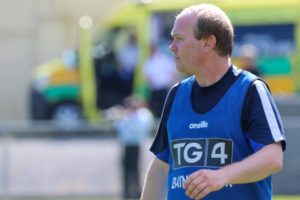 IN some ways Donie Brennan’s philosophy when it comes to laying football is quire simple, go out and score more than the opposition and you win. Simple maybe, not not always easy to apply.

“We’re old fashioned in terms of the way we like to play. They (team) caught the imagination of the Laois people by the way they play open football. If we were playing with sweepers we’d be boring and the games wouldn’t be as entertaining.”

But does that style not leave a team suspect at the back? In the final they controlled the game but were at time opened up my the Wexford attack.

“I think maybe the girls were a bit nervous (in the first half). We were dominating the game but we were not converting our chances. We went in at half time with eight or nine points but we just wanted to go out for the second half and win the match by 17 or 18 if we were able to. But Wexford hung in and got a goal at the end. This Laois, team since I’ve been involved, we win the hard way.

But in Donie’s mind the real winning of this game came from the display of his defence.

“There would have been criticism of our backs and that we had magical forwards, but I think our full back line today was absolutely outstanding. They won every 50/50 ball, every 60/40 ball and they’d bring it out and lay the foundations for the forwards. Okay, they were a bit off colour in the first half but it was their first game game in Croke Park.

It was suggested to him that he had sort of fallen into the job, but that he was surely now very satisfied he had taken the job.

“I don’t know that I fell into the job but I went to a few club games in Laois and I said the standard of ladies football in Laois must be really high. I got the job then but I couldn’t get the players I wanted in and felt this was going to be tough.

“We started slowly and the turning point for me was when we played Kildare in the last match of my first year. Even though we won the game, we got knocked out of the championship. We got around in a huddle after that game and and the next year every one came back.

“Last year, with Covid and everything, we didn’t get a good run at it but I think they enjoyed it.

“One thing with me is, today some girls got on the pitch, some didn’t, but it doesn’t matter, everyone is treated equally. Every winning team your hear the manager did this or that. The girls did all the hard work They have to dedicate their time and effort.”

And that’s what it comes down to as far as Donie is concerned, put in the effort and you will be rewarded.

“You don’t just win a semi-final or a final on the day. It’s all the hard work the girls have put in the whole year and they had the fitness and enough in the tackle. The want is the big thing when the going gets tough.”

And what about the coplur in Croke Park. It is a long time since as many blur and white flags were seen fluttering in headquarters.

“I was very proud to see the amount of blue and white. I think we took over Croke Park today and and let it be a boy or a girl, everyone is going to be inspired by this, will want to play for Laois.”

But now they are back up with the big guns next year.

“That’s the big challenge for this group, how badly they want to come back next year. I’m under no illusions. We played Kerry and Armagh this year so we know the challenges that lie ahead and the girls are looking forward to that challenge.”