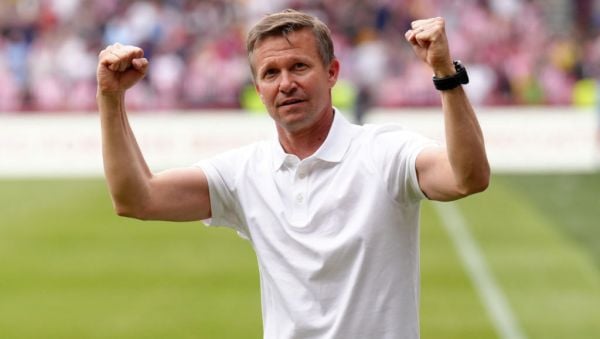 Jesse Marsch cannot wait to step back out at Elland Road this weekend with what he believes is a “better version” of the Leeds team despite the exits of Kalvin Phillips and Raphinha.

The American replaced much-loved Marcelo Bielsa in February and just managed to steer the Yorkshire side to Premier League survival on the final day of the season.

Star men Phillips and Raphinha have left for Manchester City and Barcelona respectively since then, but a swathe of interesting acquisitions have been made by Leeds over the summer.

“We know we lost two great players, but that has allowed us to bring in I think six, seven, eight other players that can help us even more precisely play the version of football that we want to play,” Marsch said.

“It was great working with Kalvin and Raphinha, and I’m very thankful for the time that I had with them and the way they committed to everything that we did here.

“But I think we’ll use the situation to make us stronger, I really believe that.”

Marsch said he has “never felt so supported in my life” and believes the work behind the scenes over pre-season holds them in good stead ahead of Wolves’ visit to Elland Road on Saturday.

“It’s too early to start talking about goals, but certainly we want to finish better than we did last year,” said the Leeds manager, who is coping with seven first-team absentees for the opener.

“I think the key in that is just to have a good start. I’m really happy that we play the first match at home in front of our fans. I know there’ll be anticipation, but there’ll be support. I know that.

“I think we’ve been able to use the time in pre-season to work in a little bit more stress-free environment.

“Obviously, there’s always pressures to improve and grow and we know once the season starts that the games demand the absolute best from you.

“We’ve even made some adjustments of what’s going on here at Thorp Arch to really just be more efficient and clean with everything we do.

“Of course, when new managers come in they bring a lot of new ideas and new styles of play and everything.

“I think that we have made incredible progress in the last six weeks and I think we’re going to see a better version of what I would like us to be on matchday, which is exciting for me.

“Certainly some of the additions have been important for that, but I think also the players that have been here have now had more time to work more intensively and minutely on the details, so that we can now transform ourselves into what we want to be.”