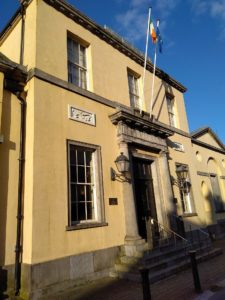 The defendant pleaded guilty to being intoxicated in public and threatening, abusive and insulting behaviour at Station Court, Portarlington on 12 July.

Sergeant Seán Keane said that gardaí were called to a disturbance at 7.25pm in Station Court. When they arrived at the scene, they found the defendant in a very drunken state, unsteady on his feet and roaring and shouting. When he was arrested, he continued shouting at the gardaí.

Sgt Keane said that the defendant had no previous convictions.

Asked by Judge Andrew Cody what he worked at, the defendant said: “a chef.”

Asked why he behaved as he did on the evening, the defendant said: “I mixed alcohol with new medication and it didn’t go well.”

The judge went on to instruct the defendant to donate €250 to the Little Blue Heroes Foundation and adjourned the case until 20 October, telling him that if it was paid he would strike out the charges.

*The name of defendants who appear in Portlaoise District Court cases are not printed on our social media sites but will be printed in the Laois Nationalist newspaper currently available in your local shops or in our online edition here.