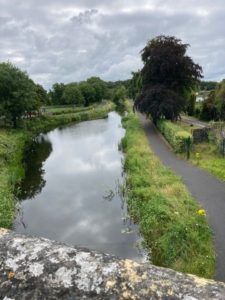 For quite a while now, air travel has been in the news for all the wrong reasons, but I’m going to leave that aside for now. More recently, internal travel has been in the spotlight. Sunday week last saw the debacle on the Dart, and on the same day a number of Bus Éireann services were cancelled. Add the recent dramatic hike in fuel prices into the mix and the many operators cutting routes, and a push towards electric cars, and you have a perfect storm for the travelling public.

I had plenty of time to reflect on these matters this day last week. On a whim, while herself was working in Mullingar for the day, I threw the bike into the car in the hope of favourable weather. The weather gods obliged and I set off from Mullingar, initially along the Royal Canal Way as far as Old Ballinea Bridge. There I took up the Old Rail Trail and followed the remainder of its 43km to Athlone. A pit stop at Tuar Árd in Moate was a welcome break.

Quite coincidentally, prior to this meander, I had been thumbing through ***The Triple Almanack*** from 1815, so my head was full of the contents of the three authors’ work –  John Watson Stewart’s ***Gentleman’s and Citizens Almanack***, ***The English Court Registry of 1815*** and **Wilson’s Dublin Directory***. I have made mention of this triple tome in the past. Running to almost 700 pages, it was the go-to repository of information in its day – a bit like Google today. And it was not cheap. The full volume cost in excess of six shillings, putting it out of reach for all but the wealthy.

The core information of almanacks of the day was information on fair days and comprehensive calendars for the days, weeks and months of that year. Typically, they would include timings for high tides around the coast, and ready reckoners, both for fractions and financial dealings. Stewart’s Almanack also contained a dedicated ready reckoner for the exchange rate of the Irish Pound against its English counterpart. (In 1815, an English Pound would cost you one pound, one shilling and eightpence Irish.) Then there was nice-to-know lists  lists of all the sovereigns, going back to the year dot; lists of the militia staffs and much more besides. You could spend weeks, months and even years poring over the breadth of information available.

In the context of my musings on getting from A to B, there is a listing of the direct roads from Dublin, through Ireland, setting out routes, distances from town to town and total distance from Dublin. Though we are back in 1815, most of the routes differ little from those we might have travelled in pre-motorway and bypass days. Some of the designated main routes show the importance of some destinations at that time – Dublin to Dingle being a case in point. That route started in Rathcoole, with the familiar Kill, Naas, Kildare and Monasterevin being the first towns along the way. Interestingly, the first stop after Monasterevin, and before Maryboro’, is Emo-Inn. The total mileage from Rathcoole to Dingle is given as 164 miles. Today, if you Google-map it, the route comes in at 201 miles.

As for my own journey from Mullingar to Athlone, in 1815 there was no direct mail coach route, but it was likely served by one of the many cross roads. Today, we think of the word crossroads, perhaps in terms of ‘Dancing at the …’ or ‘Minding mice at the …’ and we think merely of the cross-shaped intersection. In the wider sense, cross roads were minor roads linking the direct roads and serving the interior, as it were.

Though no route existed to mirror the one I cycled the other day, in 1815 and in the years preceding, there would have been no shortage of activity in that vicinity. In 1790, work had begun on the construction of the Royal Canal, in direct competition with the Grand Canal, which was already underway. The plan was to connect Dublin to the River Shannon at Cloondara in Co Longford. I won’t bore you with the problems that beset this endeavour, but in 1817, 27 years after work began, the Royal Canal opened for business.

At the time my almanack was published in 1815, the bulk of the work on the canal would already have been completed. The beautiful cut-stone bridges I encountered would have been pristine, newly-quarried limestone, free of the greenery that has since masked the true magnificence of these structures. The towpath I travelled on as far as Old Ballinea Bridge would certainly have been in place. By the 1830s, 80,000 tons of freight and 40,000 passengers a year were carried on this waterway. But there was trouble around the corner – trouble that would be to my advantage nearly 180 years later.

In 1845, the struggling Royal Canal was bought by the Midland Great Western Railway. Their plan was to use the canal bed for their railway from Dublin to Mullingar and Longford. That plan proved problematic, so the railway was constructed alongside the canal. By 1847, it had reached Enfield, and it reached Mullingar the following year. (It is worth noting that this was taking place at the height of the Famine.) Today, it is the Old Rail Trail Greenway.

Little did the Midland Great Western Railway bosses know that their decision not to fill in the canal would result in an economic boost of significant proportions to Ireland of the 21st century. I can’t say that this cyclist contributed massively, but he did leave a few euros behind him and he is already planning to do the Royal Canal Way.

Along with the listings of direct roads, my almanack gives a comprehensive mail coach listing. As well as carrying the mail, these coaches carried passengers. I will close by giving you a small flavour of this service. I will have to make mention firstly of the Enniskillen Coach, as my other half’s hometown of Ballyshannon gets honourable mention. The listing tells us that the Enniskillen Coach, with a double guard, sets out from Dublin at 7.40pm every night, travelling through Dunshaughlin, Navan, Kells, Virginia, Newtown-Butler, Lisnaskea and Maguire’s Bridge to Enniskillen. On arrival at Enniskillen on  Mondays, Wednesdays and Fridays, a ‘diligence’ proceeds through Churchill to Ballyshannon, returning Sundays, Tuesdays and Thursdays. (A diligence was a large four-wheeled covered coach. Somewhat like our vision of a stagecoach, if you will.)

And I can’t I leave without telling you how Laois commuters of old communicated with other internal locations. The Cashel Coach set out from Dublin at 6am on Tuesdays, Thursdays and Saturdays, travelling through Naas, Kilcullen, Athy, entering Laois in Stradbally and onwards to Abbeyleix, Durrow, Johnstown, Urlingford and Littleton, arriving in Cashel at 9pm. A long day. It returned by the same route on Mondays, Wednesdays and Fridays.

What the future holds for us, transport-wise, is anybody’s guess. Who knows? The canals may even come back into fashion. Indeed, a few more of these recent weather events and we might be twinning with Venice and investing in gondolas.

For now, though, I’ll be keeping my bike close by.