No medals, but Gary impresses in Canada 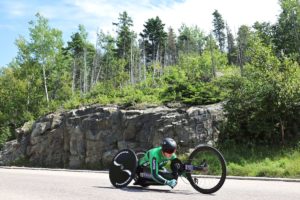 PORTLAOISE’S Gary O’Reilly may not have come home from the Para-Cycling World Championships but he put in two very impressive performances.

On Thursday Gary O’Reilly came agonisingly close to winning a medal at the championships which were held in Baie-Comeau in Canada in the Time Trial. He finished in fourth place just three seconds away from the bronze medal.

Two days later, on Saturday, Gary O’Reilly was in action in the Road Race along with his Irish team mate Declan Slevin.

Both riders put in brave rides. After being distanced on a climb Gary (MH5) battled his way back in the sprint for bronze, but finishing in sixth place while Declan finished 11th (MH3).