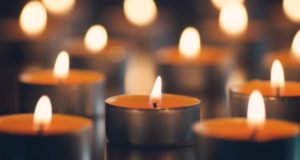 Sympathisers can express their condolences on the online section on R.I.P.ie

The death has occurred of Frances Sheeran, Late of, Coolrain, Laois