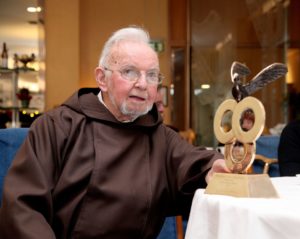 A SMALL number of public figures are instantly recognisable by their first name. One of them is Brother Kevin, founder of the Capuchin Centre in Dublin’s Bow Street, who recently retired at the age of 87. He founded the centre in 1969 and from small beginnings it has grown to a major operation, vital to the lives of so many.

It is a remarkable achievement and an extraordinary record of Christian service to the community of Dublin’s inner city. That Brother Kevin deserves our appreciation is clear – many of us see and read about his work at Christmas, but this is a year-round operation, which has helped the lives of so many, feeding them, supporting them and always treating them with dignity. Few others will have touched and helped so many in their lifetime. Brother Kevin and the many workers and volunteers who help him in the centre should be proud.

In his own way, Brother Kevin has spoken up for the poorest in society. Strikingly, he has said that it is sad that a need for the Capuchin centre still exists after all these years. That need, and on such a scale, tells us something of the inadequacy of our social safety net. No system is perfect, but too many in our society remain afflicted by homelessness, hunger and lack of hope for the future. The crisis of homelessness is clearly central to this, and the legacy of years when too few homes were built still looms large. So, too, as Brother Kevin outlines, is the scourge of drugs, now again at deeply concerning levels. These are big challenges to state’s social services and the cost-of-living crisis will only make the situation worse.

After Brother Kevin leaves, the work of the centre will go on, supported mainly by donations and also the exchequer. The challenge for the state is to tackle more effectively the problems which end up with people queueing for a meal at the centre. Brother Kevin Crowley will leave the centre next week and will go to live with his family in West Cork. He has said he will miss Dublin, but Dublin, especially the most vulnerable in the city, will miss him even more.

In many ways, Kevin Crowley personified the tisen Christ to those on the periphery of our society. The periphery was where Jesus was most present, in his short time as he walked among us. The thought recently struck me that the risen Christ, who remains present to every generation in a new and refreshing way, would have much to say and challenge regarding inequality, injustice and prejudice in today’s society.

I’m sure that Jesus in 2022 would not be found wanting in rolling up his sleeves and embracing the most wounded in our society. Brother Kevin lived a very practical spirituality, grounded in the Gospel and inspiration from the life of St Francis of Assisi. A prophet is grounded in reality and yet courageous in witnessing the good news.

Often in life, we don’t fully appreciate what we have, until it is taken from us, be that our health, our job, a loved one. Gratitude is a very positive attitude and instils within us a sense of hopefulness. Kevin Crowley is a very happy man, and in giving to so many, he has received so much love and affection. As Brother Kevin retires, we should remember the poor we still have with us in ever greater numbers because of war, famine and drug and alcohol addiction.

A prayer of St Francis of Assisi

Fr Paddy Byrne: God is with us every minute of every day

Fr Paddy Byrne: Stay positive and never give up