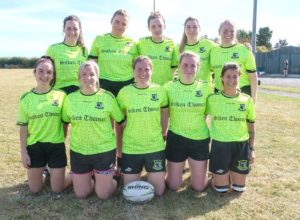 THE inaugural Silken Thomas Women’s Rugby Tens Tournament was held on Saturday in Portarlington Rugby Club. Hosted and organised by PortDara Falcons, the event was an unmitigated success. There was a real festival atmosphere from early morning as PortDara served up a great day out for all the family, complete with music, barbecue, children’s games, and some seriously scintillating rugby.

Since Portarlington and Cill Dara amalgamated their women’s teams to form the PortDara Falcons, the side have become a cornerstone of both proud rugby clubs. The unprecedented success of the Falcons was a critical factor in Portarlington winning the Leinster Rugby Junior Club of the Year 2022 Award.

The creation of this Tens tournament is yet another feather in the cap of the Falcons, who are fast becoming a centrepiece of women’s rugby in Leinster.

The ten-a-side format is similar to Rugby Sevens, which has been gaining popularity here in Ireland with the continued and growing success of both the men’s and women’s teams. Sevens rugby rose to prominence with its inclusion in the 2016 Olympic Games, but has been a vital part of growing rugby in smaller nations for decades.

Aside from the additional players, the main difference between tens and sevens is that tens rugby incorporates scrums and lineouts. This gives players a competitive platform to hone their skills in the more technical aspects of the sport.

In total, six counties from around Leinster were represented on what was a great day for women’s rugby. The hosts entered not one but two teams – PortDara 1 and PortDara 2 – epitomising the growing depth in the Falcon’s squad. Walsh Island’s Celeste Cannon was outstanding all day for PortDara 1, and was arguably the player of the tournament. She acted as a kind of back row-centre hybrid, playing with seemingly endless energy, speed and strength; tackling and winning balls at the ruck; running direct lines; and creating space through dynamic running and intelligent support play.

Celeste told the Laois Nationalist that the tournament was an opportunity to “build the team and bring new players up to speed. We have five or six new girls that we’re really relying on, and they’ve showed with no fear somehow. We had a hard season last year with numbers, so to be able to get two teams out today is really important for us. Hopefully we can keep it up during the season ahead.”

PortDara 1 had been the team to beat all day, winning all four of their group games and securing three bonus-point wins. Eve Keogh was her team’s top try scorer, running in from everywhere on the pitch. She was also a major force in defence, as was scrum-half, Kate Tynan who led from the front, showing great leadership, communication and team management. Alexandra Pop, meanwhile, injected energy and pace to the team at crucial times, always looking to create try-scoring opportunities.

No match held more weight that the much-anticipated PortDara derby, as both sets of Falcons players smashed each other all around the park for an intense 20 minutes. PortDara 1 eventually pulled away, taking the game 24-15 and topping the table overall heading into the knockout phase. The game was, of course, played in good spirits; but plenty of markers were laid down for the season ahead.

In the end, however, they had nothing left in the tank after a long day playing in the hot sun. Kilkenny were ultimately crowned champions, beating PortDara 1 by 34-7 in a surprisingly one-sided final.

PortDara 2, meanwhile came out on the right side of the Bowl Final, beating Swords 17-12. The sides needed extra time to decide a winner, which ended with a dramatic Golden Try from Evie Dickinson to claim the trophy for the hosts. Portarlington native, Laura Oakley was a tackle machine all day and played very well under the leadership of Falcons’ Director of Rugby, Francie Fitzpatrick who proved she is still an unbelievable player and leader. The way Francie covers every blade of grass, tackles hard and gets over the ball while jackaling is truly Josh Van Der Flier-esque.

PortDara may have uncovered a real gem in new-comer, Ruth Downey. Downey, who was a rock in defence all day, revealed to the Laois Nationalist that this was her first time to ever play rugby. “I play GAA all the time, so rugby is an ideal sport for winter. My boyfriend plays for Cill Dara so I got to know the girls that way. I just did it for the craic really.” A modest reaction from a player who could easily make the step up.

New Ross picked up some silverware when beating Greystones 22-12 in an entertaining Plate final.

After the trophy presentations, Falcons Director of Rugby, Francie Fitzpatrick spoke to the Laois Nationalist about the success of the event. “It was great to have so many people — players, club members, volunteers, referees, and supporters — come together in support of women’s rugby,” she said.

“The success of a rugby club is all down to the people within it and luckily for us, PortDara Ladies Rugby — with support from Portarlington RFC and Cill Dara RFC — has an incredible group driving it. We were thrilled to put on a women-only rugby event and have a fun, social day filled with very competitive games.

“We’re grateful to our premier sponsor, the Silken Thomas, as well as our other sponsors — the Grillshack, the Railway Bar, LIDL, and Dempsey’s Gala — for their support. We can’t wait to build on the success of this year’s event and are already looking forward to the next one.”

Win or lose, all the teams enjoyed themselves, played with smiles on their faces and embraced the carnival atmosphere. With the women’s season not due to start until early October, events like these will hopefully become a permanent and regular fixture on the calendar in future seasons. With so many positives, future tournaments should be treated as prestigious, marquee events for women’s rugby in Ireland. 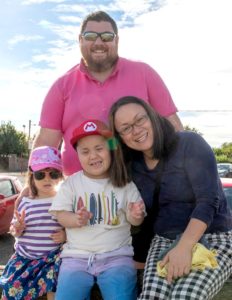 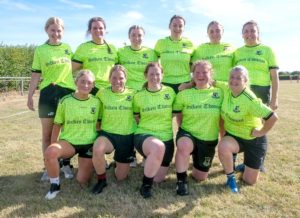 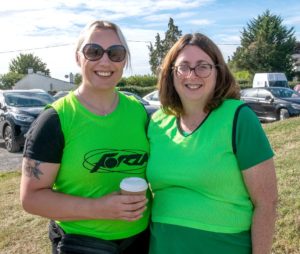 Karen White and Linda O’Donnell enjoying the sunshine in Portarlington 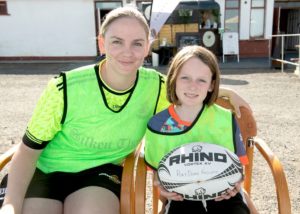 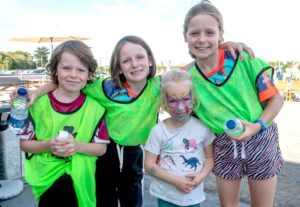 Gavin, Corina, Aoife and Keeley Fitzpatrick enjoying themselves on Saturday 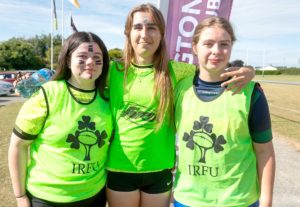 Clodagh Goulding, Ellie White and Hannah O’Donnell were ready for the action