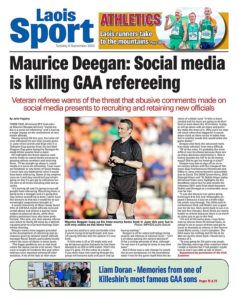 Three-time All-Ireland SFC final referee Maurice Deegan believes “social media is a curse on refereeing” and is having a major impact on the recruitment of new match officials.

Having turned 50 this year, the Laois referee officiated his last inter-county game in June when Leitrim and Sligo met in a Tailteann Cup quarter-final, his last Sam Maguire Cup game being the Donegal-Armagh Ulster quarter-final in April.

He highlights the threat abusive comments made on social media presents to growing referee numbers and retaining them.

We also have an extensive interview with one of Killeshin’s most famous GAA sons, Liam Doran