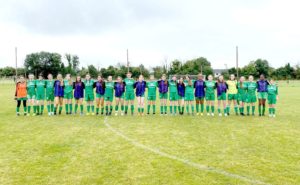 History making photo – Two Portlaoise Portlaoise AFC girls’ teams met competitively for the first time ever with the 15;s taking on the ’16s in the U/16 Midlands League

ON the first damp and dreary day in Autumn 2022 an historic meeting took place in Rossleighan Park when two Portlaoise AFC girls’ teams met competitively for the first time ever.

That Portlaoise AFC now provide the underage structure and have the ability to field six girls teams at various age groups and two in this seasons U/16 Midlands League is testament to the work being done in the club at underage and girls level.

Saturday’s match had some fine performances from girls on both teams. Cousins played cousins, and friends and classmates lined up against each other in what was a good match played in great spirits throughout.

Portlaoise 16’s was short of a number of key players through illness and injury, including goalkeeper Eire Delaney, and were up against it from the start against Portlaoise 15’s.

Divine Samuel gave an exhibition of centre back play throughout, and along with Abbey Louise Byrne and the hard-working Sadhb McGrath, they made short work of the fact they were down numbers for the first 15 minutes of the half.

Portlaoise 15’s probed and probed, with captain Aoibheann Bourke and Emma Frances working hard in the centre of midfield and, after 15 minutes, a through ball from Leah Brennan found Ciara Breslin for took it first time on her left foot and drilled it low beneath the goalkeeper.

Anna Keegan and Leah Brophy in the wide positions worked tirelessly up and down the wings linking attack and defence. Some great tackling on 20 minutes by Keegan, meant the ball spilled to Emma Frances, who, without hesitation sent Breslin on her way and Portlaoise 15’s had a second.

The remainder of the half saw the Portlaoise 16’s, driven on again by McGrath in midfield, create a number of chances. However, they didn’t manage to create anything clear due to the efforts of Niamh Dundon, Emily Flynn and Hollie Murphy at the back.

Half time came and went, and the second half followed a similar pattern to the first, with a midfield battle and both teams trying to release their attackers and wide players.

Lily O’Meara and Saoirse Carroll Connell came on in midfield for the 15’s and Lucy Moran at the back, with Keelin Moore coming on in the forward line.

O’Meara worked tirelessly on the right and put in a number of great tackles, and from one of these she played the ball to Moore who found herself in space between midfield and defence. As she done on many occasions, she played an inch perfect pass for Maisie Kerry, who duly dispatched to the net.

As the clock counted down a Sadhb McGrath free kick from 30 yards brought the best out of Doireann Brennan, whose distribution was excellent throughout.

The last action of the game saw a final goal for the 15’s with a fine corner from Niamh Dundon turned in by Hollie Murphy.

Player of the game: Maisie Kerry.