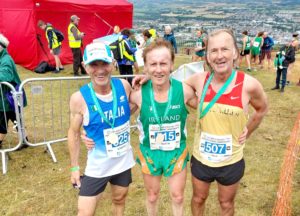 WHILE most of Laois was partying at the Electric Picnic, the mountain runners were hard at it in two separate locations over the weekend.

The 21st World Master Mountain Running Championships were hosted by Ireland in the Comeragh Mountains near Clonmel on Saturday. At the same time, the Home Countries Junior International was taking place in Cumbria, England.

The junior event was dominated by the fell runners of England, Scotland and Wales. Their young runners were like mountain goats as they raced away up into the hills and their descent was just as spectacular, never putting a foot wrong as the almost sprinted down through the rocks and crevices.

In the U/17 team categories, and also U/20 Boys, Ireland and Northern Ireland were battling for fourth place.

The other Laois athletes, Cillian Moran, Ruairi Jago and Della McLoughlin battled bravely. They found the very technical descents a big challenge – think of the most difficult off-road terrain in Oughaval Woods, and multiply it by 10, and this gives an idea of the difficulty level.

Meanwhile, the Masters were flying high in the Comeragh Mountains. Competitors from many countries competed in their age-categories on a stiff climb over Clonmel.

First up was the ever-green Dick Mullins in the 8k O/75. While he didn’t feature in the top three individual positions, his team of Dick, Patrick McCreanor and Anthony King finished third behind Great Britain and Italy.

Martin McDonald was the hero of the day, winning the individual 10k race in the O/65 by nearly a minute, and leaving runners from Italy, Germany, Austria, Great Britain, USA, Spain and the Czech Republic in his wake. In addition Martin led the Irish team of Martin, Joe Gough and Eugene Doherty to the team gold.

It was a great weekend for the McDonalds, double gold in the Masters race and Bronze in the Junior race.