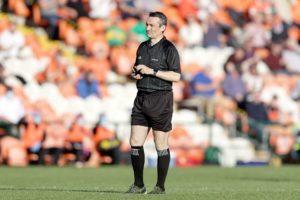 Maurice Deggan hung up his inter-county boots back in June this year but is still very active on the home front Photo: INPHO/Laszlo Geczo

Three-time All-Ireland SFC final referee Maurice Deegan believes “social media is a curse on refereeing” and is having a major impact on the recruitment of new match officials.

Having turned 50 this year, the Laois referee officiated his last inter-county game in June when Leitrim and Sligo met in a Tailteann Cup quarter-final, his last Sam Maguire Cup game being the Donegal-Armagh Ulster quarter-final in April.

He highlights the threat abusive comments made on social media presents to growing referee numbers and retaining them. “I’ll be straight up about it, social media is a curse on refereeing. I was never on Facebook or any forms of social media. I never saw any backlashes when I would have been refereeing. Some of my umpires were on it and they would tell you what’s going on but it’s just got to ridiculous levels now at all levels including club and juvenile.

“It’s turning off and it’s going to turn off people from refereeing. Recruiting them is going to be a struggle and it’s going that way unless something is done. I don’t have the answers to that but I would like to see meaningful suspensions brought in.”

A recent University of Ulster study found 94% of 438 GAA match officials received verbal abuse and almost a quarter were subject to physical abuse, while disciplinary processes have also been problematic. This year, one inter-county referee was asked to clarify 92 items by a defending party prior to a Central Hearings Committee meeting.

Deegan wants more support provided to the development of refereeing and assistance given to national match officials manager Donal Smyth, particularly locally where the issue of abuse is more acute.

“The bigger problems are at club level where the abuse can be a lot worse. There were a couple of incidents this year when referees were attacked coming off after matches. A lot of the lads at inter-county level are used to it and can handle it but if you’re trying to bring through and nourish young referees into the system it’s very hard.

“A fella who is 22 or 23 might only end up doing two games because he has been abused at an U12 or U15 match. That’s the way it’s gone. It’s the same as a team – if you don’t have refs coming through the group will become stale and you’ll end up having nothing.”

Deegan is all for video technology being used to aid referees at national level – “isn’t it all about getting the correct decision? I’d be a strong advocate of that, although I’m not sure it is going to come in any time soon.”

And if there was a rule change he would like to see introduced, it’s the countdown clock if not for the game itself then the duration of a black card. “A fella is black carded and his team are going to do their best to wind down the 10 minutes. A player will go down with an injury and possibly make the most of it. Why can’t we stop the clock when that happens? A countdown clock as there exists in ladies football is another tweak that would make the game better.”

“Of all the rules, it’s probably the most difficult rule to referee because there are so many decisions attached to it. Was it kicked outside the 45? Is he 20 metres away? Did he get his hand up in time?”

Deegan was due to sign off as an inter-county referee with the inaugural Tailteann Cup final between Westmeath and Offaly in June only to become unavailable due to Covid. The 2008 Tyrone-Kerry, 2012 Donegal-Mayo and ‘15 Dublin-Mayo replay All-Ireland finals were highlights for the Stradbally native but he also recalls the infamous 2011 semi-final clash between Dublin and Donegal as a memorable occasion for him.

“It was the dourest ever game going, finishing 0-8 to 0-6, but I thoroughly enjoyed it because it was on a knife-edge the whole way through. The 2010 semi-final between Cork and Dublin was a good one for me too. Cork came back to win it in the last few minutes. Semi-finals are nearly harder to referee because there is so much at stake just to get to the final.

“I’m one of the lucky ones, I was fortunate to referee three All-Ireland finals, involved in six or seven of them and got to travel to Australia to referee in the International Rules series. I can’t complain. The GAA owes me nothing and I’d like to be able to say the same back. I loved every minute of it.

“To stay going for 20 years was tough, the Monday mornings after matches when I made a mistake but I had people I could turn to and I was able to talk to them.”

REPRODUCED BY PERMISSION OF THE IRISH EXAMINER