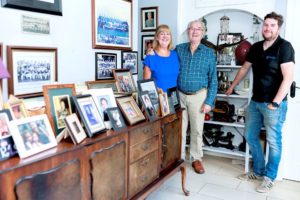 Liam admits to having felt greatly let down at the age of 28 by being dropped by the Laois senior football selectors after an unbroken decade in the Laois jersey, holding the firm opinion he had more to give to the team.

In the modern era Liam referenced the great run by Killeshin to the 2020 Laois senior football final, only to come up a point short to Portlaoise (0-14 to 2-7). It was the closest the club came to a maiden SFC title.

Liam Doran is anything but impressed with the way the modern game of Gaelic football has gone. “In that regard I heard a great comment recently from a man about Dublin’s six-in-a-row All-Irelands. This man said: ‘They won one of them in their bare feet’ – a reference to the fact that there is so little kicking of the ball in the modern game – obsessive handpassing now being the norm.

Liam said, with a certain dismay: “In today’s game you would hardly see a ball kicked the length of this room!”

Would anyone, he asked, cycle from Portlaoise or Carlow to Croke Park today to watch a football match, as supporters did in their droves during the 1930s and 1940s? He thought not, remarking ruefully “Gaelic football is not the game it used to be.”

He envies the way senior county footballers, particularly in the successful counties, are pampered, making a comparison with his playing days at the top level.

Going back to his great days with Laois Liam stated: “I would get up at 4am on the Sunday of a game and milk 40 cows. In my earlier years with Laois, the cows were milked by hand. In time I purchased a two-unit milking machine and eventually a five-unit herringbone machine, which meant the milking time took only a quarter of the time.

“Then there was the feeding of the 200 pigs on the farm. That wasn’t easy work and took time. I would then attend 7.30 am Mass in Carlow’s Cathedral of the Assumption, come home and have my breakfast.” A spiritual man, Liam has a special devotion to Our Lady.

Nowadays, he says, county football and hurling teams travel in plush, modern buses to play games, with no distractions to occupy their minds before the imminent game.

Liam said he, along with other Laois players from that end of the county, would be collected by Laois GAA driver Mattie Callinan from Carlow. “Mattie was a real character and a man who would never leave anyone behind. People would be squeezed in somehow, maybe lying on the floor but nobody was left behind” Liam remembers with a laugh.

It was, said Liam, easy as you go with Mattie, who never went over 50 mph but his precious cargo of footballers was always guaranteed to make the venue safe and sound and in plenty of time.

Throughout his outstanding football career at club and county level, Liam only suffered one serious illness.

That happened during a challenge match against Cork when he received a blow to the kidney area, which necessitated 10 days hospitalisation in the County Hospital, Portlaoise.

While Liam was established at centre back for Laois, he had company on the team through Killeshin clubmate Seán Price, who played right full forward. Séan was an army man, based in The Curragh. Liam said: “Séan Price was a rare, good player – he was left footed, yet played in the right corner. He had a great strain of football in him,” Liam said of his former club and county colleague.

Then there was the honour for Liam of being selected as a panellist for the Leinster Railway Cup footballers, even if the eastern province did not prevail that year. Winning a Railway Cup medal would have been a crowning glory for Liam Doran.

He recalled at that time in the early 1960s there was fierce competition between two fine, neighbouring full forwards, for the Leinster full forward berth. Noel Delaney of Portlaoise always seemed to get the nod over O’Hanrahans and Carlow No 14, Ned Doogue. He said Doogue could create scores “out of nothing.”

Some time ago Liam was delighted when, through the auspices of mutual friend Declan O’Loughlin, the great Mick O’Dwyer of Kerry called to see him in Keelogue. The two former footballers chewed the fat for a number of hours, providing Liam with a treasured memory of the Waterville legend he greatly admired as an outstanding player and Gaelic football’s greatest ever manager.

Asked about the footballers he considered the best he had ever seen, surprisingly Liam did not opt for players from Kerry, Dublin, Galway or other successful football strongholds.

Instead two players from less successful counties vied for his vote.

Liam regarded the late Packie McGarty of Mohill in Leitrim as a forward who had everything a good forward needed. He was a man who could score 1-10 or maybe 0-11 in a match – regularly clocking up big scores. “I marked him once and was pleased that he only scored 0-4 off me, that was a small score for Packie.” The great Leitrim footballer, who had a shop in Dublin, passed away in April 2021, at the age of 88.

The other player he selected was the late Mick Carley of Westmeath, who he regarded as a prince among midfielders, possessed of all the qualities needed in the middle of the park – wonderful fielding, distribution, work-rate and scoring ability. Carley, who died in March 2019, is widely regarded as Westmeath’s greatest ever footballer, winning back-to-back Railway Cup medals at midfield for Leinster in 1961 and ’62.

Coming from a small, rural club like Killeshin, which has enjoyed limited success in Laois football down the years, it was a nice compliment from Liam to name two players from counties who don’t enjoy all that much success. That’s not to forget Westmeath were recent winners of the inaugural Tailteann Cup football final, with victory over Cavan, a ‘sleeping giant’ of Gaelic football county whose most recent successes go back to the late 1940s and early 1950s.

When asked who the greatest Laois footballer he ever saw, Liam said, without hesitation, that it had be Gaelic football’s ‘Boy Wonder’, the great Tommy Murphy of Graiguecullen. Growing up in Keelogue Liam was aware of the public adulation surrounding Murphy and, as a teenager, he had seen him play, being blown away by his magnificent fielding ability, even if the Graigue, Laois and Leinster star was reaching the latter stages of his stellar football career.

As far as his football days with Killeshin went, Liam said that the late Jimmy Delaney was the man over the club at that time. And Jimmy had gone on to leave his mark with Carlow Town Hurling Club when he lived in the county town.

Outside of his football exploits, Liam Doran was an accomplished badminton player. The sport was based in the local Killeshin Hall and the Laois club took part in the South West Badminton League for many years.

Liam played singles and doubles in badminton, one of his doubles partner being a neighbour of my own, Mary Quinn, Green Lane, Rathnapish, Carlow. Another badminton partner was Liam’s late sister, Mary Behan while Margaret O’Shea from Tolerton also teamed up with him in the sport. Liam established a great understanding with all three partners, winning many trophies and cups in badminton.

Liam also enjoyed playing racquets in the Carlow Sports & Social Centre, College Street, formerly the CYMS premises. As with other sports he played, Liam was competitive in the racquet court.

Liam lives close to his good friend and brother-in-law Mick Behan, who resides on the Laois/Carlow border. Mick was married to Liam’s late sister, Mary.

The two GAA men often meet up for a chat.

Mick, a former garda in Dublin, played at right half back and won an All-Ireland Club senior football medal in 1976 with St Vincent’s, the legendary north county club who lead the roll of honour in Dublin SFC titles. Mick also played for Dublin at senior football level in tournaments and at National Football League levels.

By coincidence, Vinny Lambe was centre back on that St Vincent’s team of 1976 which defeated Roscommon Gaels in the All-Ireland Club final. Vinny, a retired bank official, is currently strongly involved with Bagenalstown Gaels GAA Club and with ladies football in County Carlow.

And when playing with Graiguecullen he came within the kick of a ball of winning a Laois championship, which would have given him county SFC wins in three separate counties.

Having celebrated his 84th birthday on 7 July, Liam Doran remains active, still helping out on the Doran farm, providing a hand to son Liam who combines his car business with the farming needs.

During the first Covid-19 Lockdown, Liam senior suffered a serious injury while cutting down a tree on the Doran farm. He was using a chain saw when the bough of the tree he was attempting to fell caught him across the shoulder, rendering him unconscious. He was hospitalised for some time afterwards and suffered from serious memory loss in the wake of the accident. Thankfully, his memory continues to return with the passage of time. Certainly Liam’s memory of his sporting life remains largely undimmed.

Son Liam is in the motor trade, which he operates from an auto premises located beside his parent’s home. Liam has followed in his dad’s footsteps, playing for both Killeshin and Laois.

He played midfield for Killeshin for a good number of years and at Under-21 level for Laois, while lining out for three years with the Laois junior footballers. He is still playing Junior ‘A’ football for Killeshin but their championship ambitions 2022 were extinguished recently with defeat by parish neighbours and rivals, Graiguecullen. But, on the cusp of 40, Liam’s enthusiasm for the game is patently obvious.

Liam’s wife, the former Rosaleen Martin is a native of Glin, Co Limerick. She and Liam met at a dance in Dublin and married in Kill, Co Kildare on 18 August, 1979.

Rosaleen is still glorying in the completion of the three-in-a-row by the Treaty County hurlers. Meanwhile husband Liam remains a great admirer of the Kilkenny hurlers.

To end where I began. Rosaleen informed me there was no immediate plans on the day itself to mark the 43-year marriage milestone. But she hinted that, rather than let the wedding anniversary pass without fanfare, there might be a night out in the offing with her husband of two score and three years, a man who remains a living legend of Laois GAA!