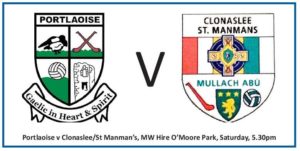 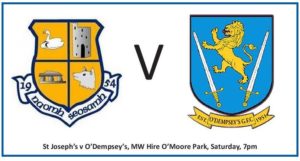 The senior football championship gets down to the business end of this this weekend with two quarter-final double headers. Today sees last year’s beaten finalists, Portlaoise take on Clonaslee/St Manman’s who will be playing intheir first ever quarter-final.

The second game in MW Hire O’Moore Park pits St Joseph’s against O’Dempsey’s in a game that is very hard to call.

Last year’s beaten finalists, Portlaoise were the first side to earn a place in the quarter-finals after their seven point defeat of Courtwood. This was their second win after seeing off Emo in the opening round with five points to spare.

It could be said that they have not particularly impressed in either game but how often have we said that of the Town. But it has to be said there seems to be a determination in this side to get the club back to the top.

For their opponents, Clonaslee/St Manman’s this is new territory. Cathal Lee was their hero last time out against Ballylinan as his goal with less than half a minute play was the score that sent them into first ever SFC quarterfinal.

They had lost their opener against Graiguecullen but just four points separated the sides.

That was an impressive display but it is still hard to see them advance to the last four but recent year’s Ballyfin have shown that the competition’s minnows can have a say it the championship race.

Could this be the year St Joseph’s put many disappointments behind them? How often have they gone close only to disappoint.

This year they caused a bit of surprise when they advanced all the way to the ACFL Division 1A final and came away with the honours with the defeat of a Graiguecullen side who have high aspirations this year.

They went on to wallop Ballylinan in their opening game and followed that up with a narrow win over Ballyroan Abbey. If they can continue to show the form they did in the league to could have a major say in the title’s destination.

O’Dempsey’s got a major boost with the return of Mark Barry after a summer of travelling. He came on against Park/Ratheniska last time out recording six points.

The Kellyville outfit, like their opponents have promised all to often to deliver the goods only to fall by the wayside. They do, however, look to have a sharpness about them this year and might possibly cause an upset on Saturday, but I would still have to go with the lads from Kellyville.