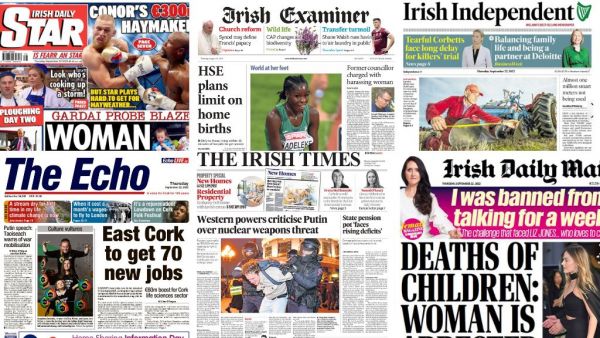 On Thursday’s front pages, world leaders have condemned Russian president Vladimir Putin’s threats of nuclear warfare, the trial for the murder of Limerick businessman Jason Corbett is to go ahead next June, and a woman was questioned following the deaths of two children in a car fire in Co Westmeath.

The Irish Times reports that Ministers have been warned that the State’s pension pot will be hit with “growing deficits” in the years to come despite an expected multibillion euro surplus this year. While Western powers have strongly criticised Russian president Vladimir Putin after he called up military reserves to fight in Ukraine and threatened to use nuclear weapons. 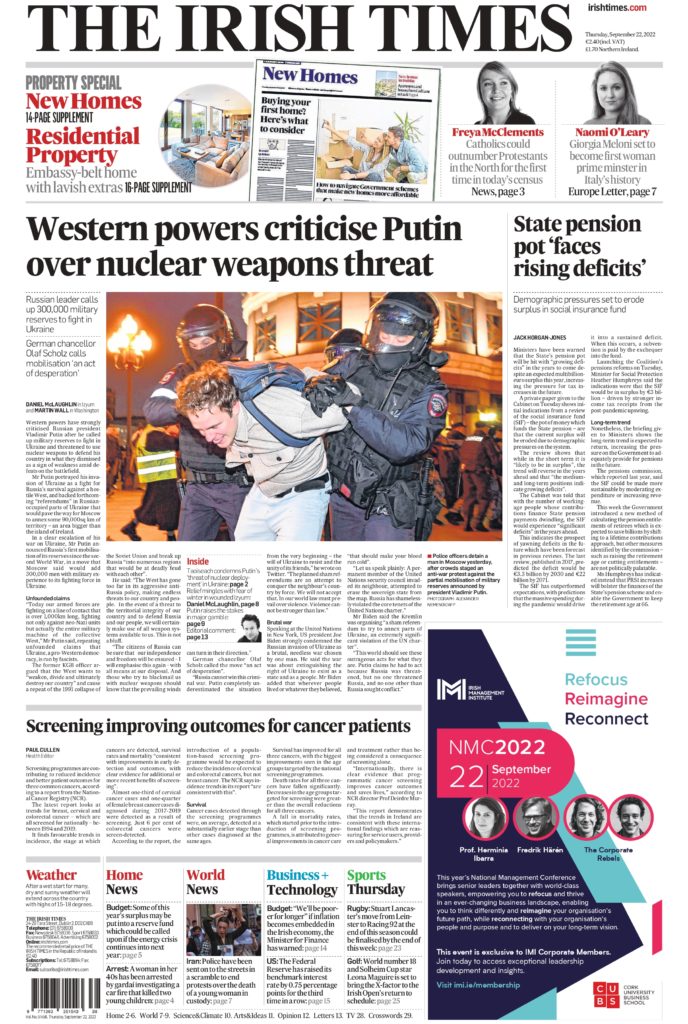 The Irish Examiner reports that farmers are to be included in a new energy support scheme for all businesses to be announced on budget day.  Molly and Thomas Martens will go on trial next June for the murder of Limerick businessman Jason Corbett, a US judge has said. While gardaí investigating the deaths of two young children in a car fire in Westmeath have arrested a woman for questioning. 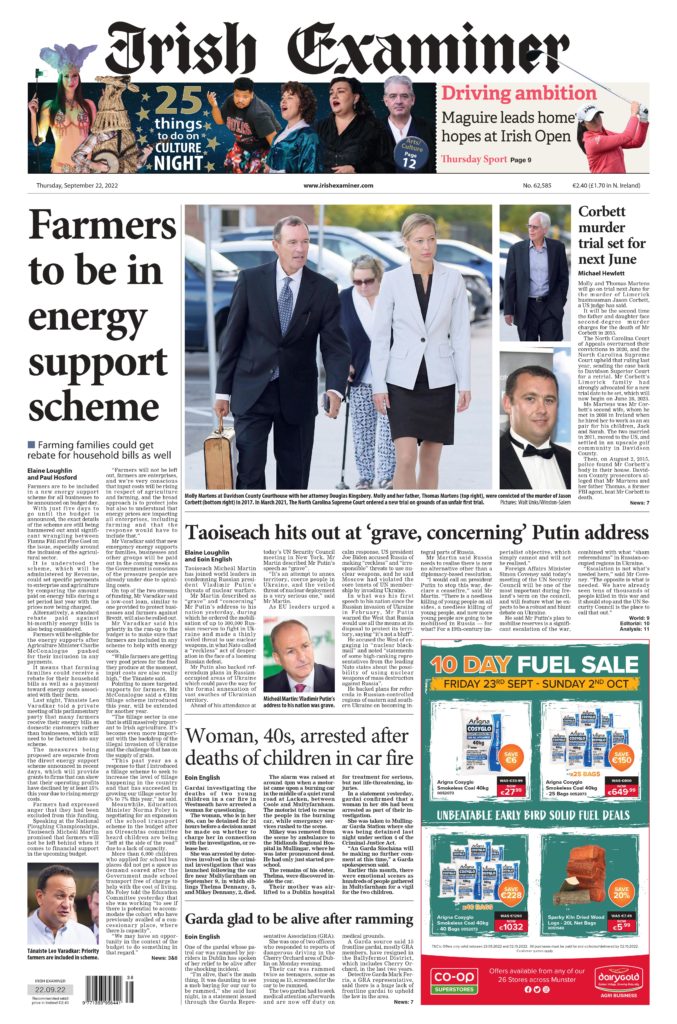 On the front page of the Irish Independent, thousands of homeowners face being caught by the wave of rising interest rates because overwhelmed banks are too slow to process their mortgage-switching applications. While only a tiny fraction of those who installed smart meters in their homes are using them as intended. 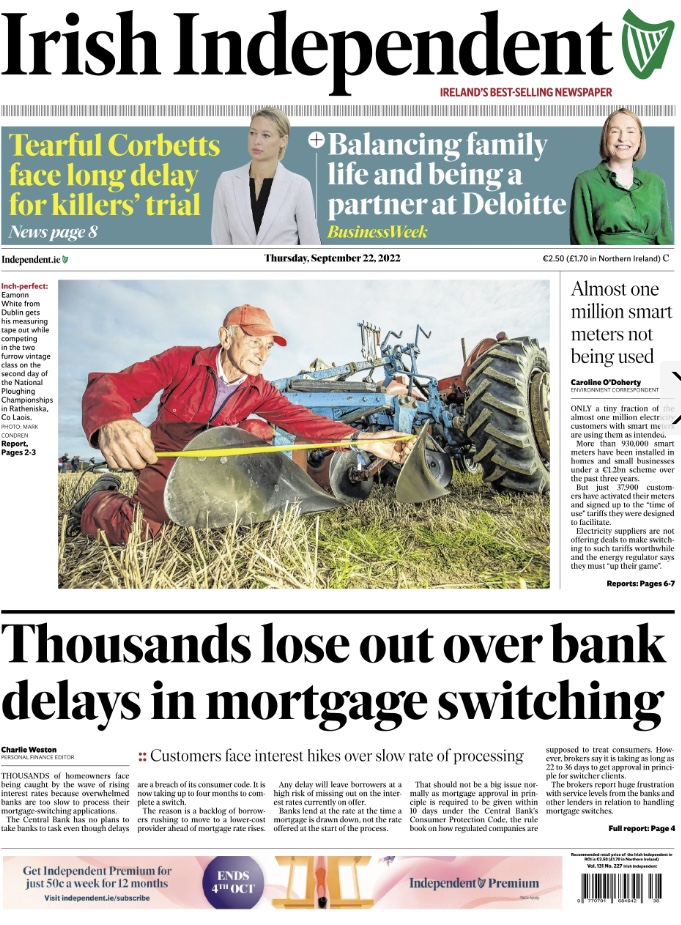 The Echo reports that 70 new jobs are to be created in Carrigtwohill, as biopharmaceutical company AbbVie has announced a €60m investment in its manufacturing site in Cork. Taoiseach Micheál Martin has said he is “very, very concerned” about yesterday’s speech by Russian president Vladimir Putin. 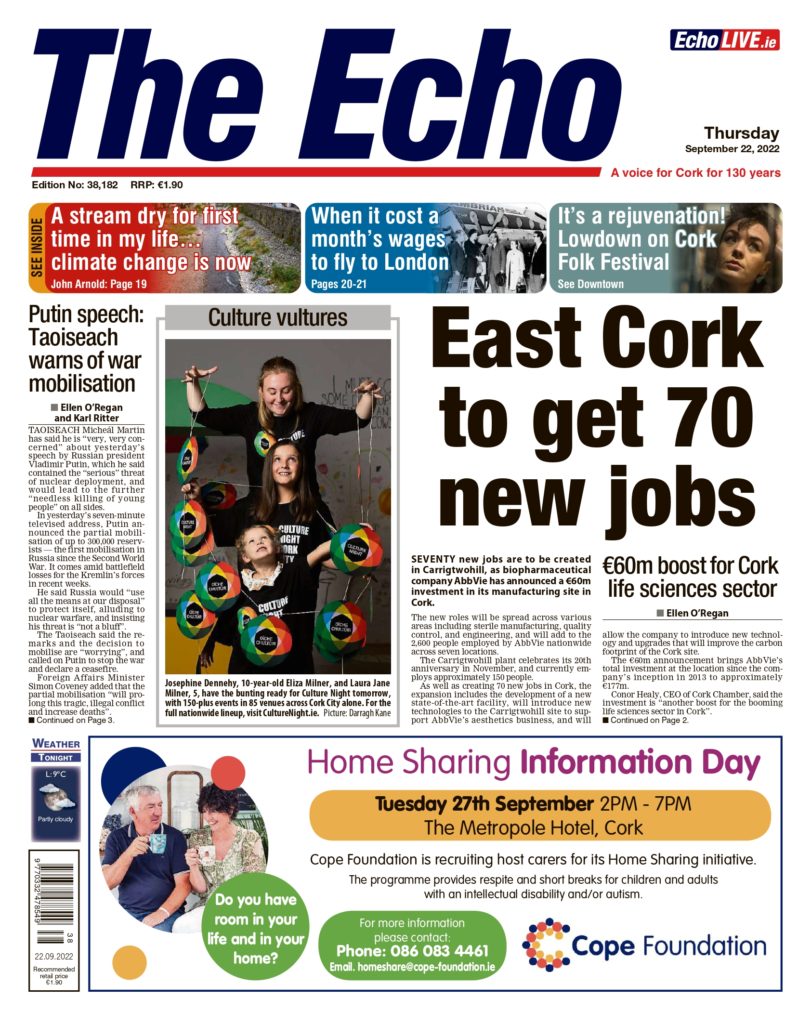 The Irish Daily Mail reports that woman in her 40s was arrested and questioned over the deaths of two children aged two and five in Co Westmeath and their car went on fire. 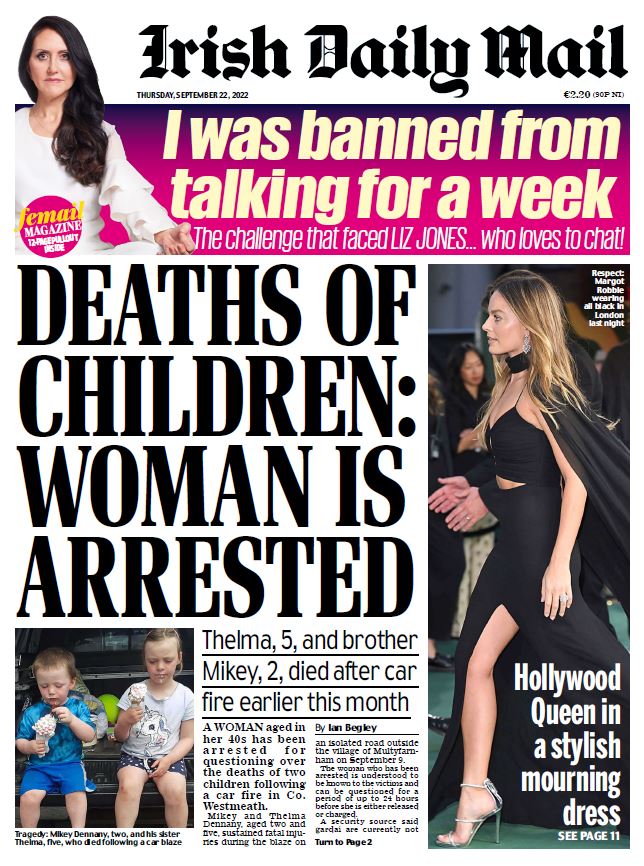 On the front page of the Irish Daily Star, a woman was being questioned over the death of two children who died in a car fire in Co Westmeath. 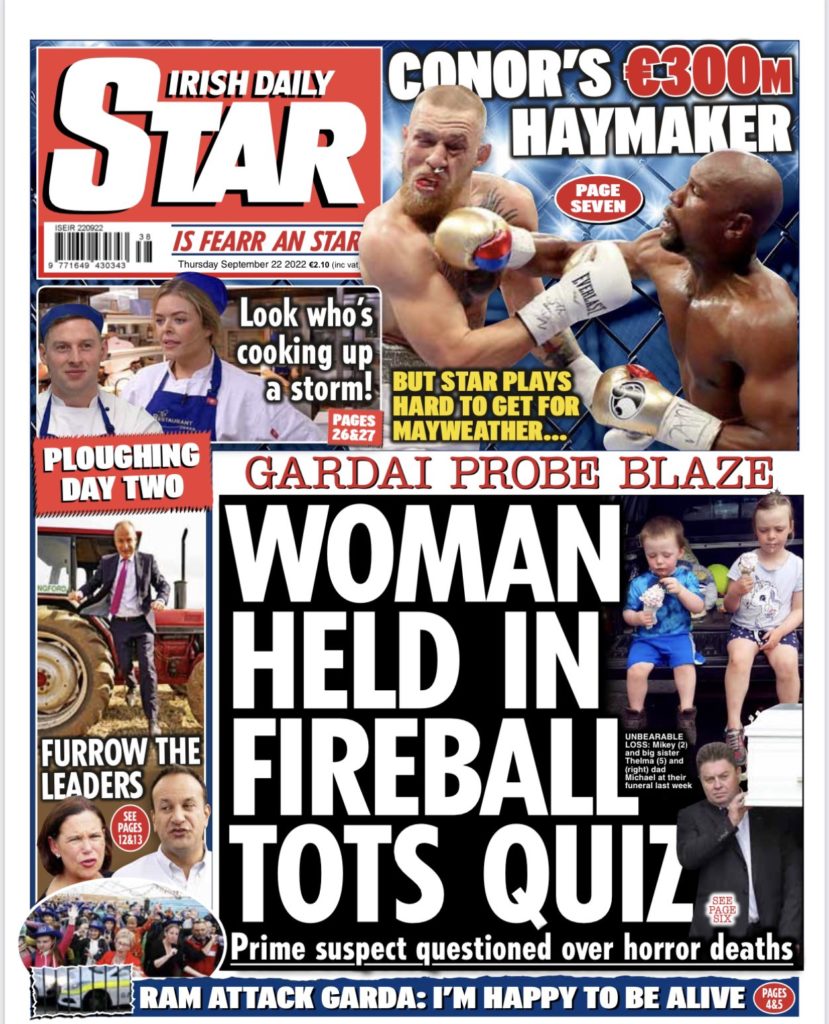 In the UK, Widespread condemnation of Vladimir Putin’s latest nuclear threat features across the nation’s papers.

The Daily Telegraph and Daily Mail carry Liz Truss’s reaction to the Russian president threatening nuclear war amid the conflict in Ukraine, with the Prime Minister vowing a “desperate” Mr Putin would be defeated.

Meanwhile, The Times, The Guardian and The Independent lead with US President Joe Biden calling Mr Putin’s threats “reckless”, as he warned a nuclear war “cannot be won and must never be fought”.

The move has sparked mass protests across Russia, according to Metro.

Elsewhere, the i leads with warnings over Ms Truss’s “gamble” on tax cuts.

The i: Warning over Truss gamble on tax cuts #TomorrowsPapersToday pic.twitter.com/JLza4djemq

Health Secretary Therese Coffey has promised all patients will be given a GP appointment within two weeks, according to the Daily Express.

Express: Your doctor *must* see you in two weeks #TomorrowsPapersToday pic.twitter.com/w973v8f6g3

The Daily Mirror reports police have issued a record £200,000 reward to help catch the killer of Olivia Pratt-Korbel.

And the Daily Star says the late Duke of Edinburgh had a cache of secret UFO documents, which investigators are now calling to be released to the public.