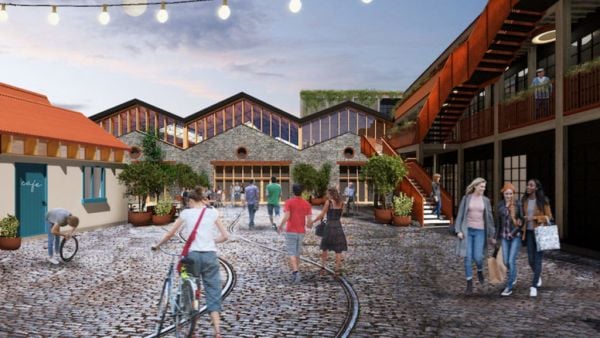 A company part-owned by U2 frontman Bono is objecting to a planned apartment scheme for Dalkey.

Bono has a one third share in Clós Nua Ltd that is behind plans to regenerate the Tramyard site.

Clós Nua Ltd secured planning permission to redevelop the former tram terminus site in the centre of the south Dublin village in August 2021 in the face of stiff local opposition.

In total, 48 parties, including Dalkey Community Council, made submissions to the County Council on Clós Nua’s contentious Tramyard plan which includes retail, cultural, restaurant and bar uses around a planned public plaza.

An Bord Pleanála gave the scheme the go-ahead but only after quashing the company’s proposal for a rooftop bar and restaurant, citing “visual amenity” in the picturesque village.

Now, consultants for Clós Nua – part owned by Bono and Belfast-born hotelier and property developer Paddy McKillen Snr – have claimed that the new eight unit apartment scheme next door at 16/17 and 18 Dalkey’s Castle Street is “unacceptable”.

Clós Nua purchased the Tramyard site for a reported €3 million to allow the regeneration plans to be lodged.

Planning consultant for Clós Nua, Suzanne McClure of Brock McClure has claimed that the apartment scheme “represents significant overdevelopment that is entirely disproportionate for this small infill site”.

Ms McClure claims that the apartment scheme would ultimately devalue the Tramyard site and adversely impact its vitality and viability along with that of Castle Street.

In its submission on behalf of the Tramyard owners, Ms McClure has told Council that “construction on the (Tramyard) project is due to commence in the near future”.

The objection states that Clos Nua “has serious concerns” relating to the Wann proposal and has called on the Council to refuse planning permission.

Ms McClure claims that the scheme will have a “disproportionate impact” on the Tramyard site.

Ms McClure states that the scheme “is inappropriate, presents overdevelopment and is incongruous in the context of surrounding buildings”.

Ms McClure further argues that the scheme “would constitute a form of development out of character and unsympathetic to its location in a Conservation Area in the centre of the Heritage Town of Dalkey”.

Ms McClure goes on to claim that as a result of the “overbearing nature” of the apartment plan proposal, the Tramyard site at 16a Castle Street “will experience a significant loss of amenity and privacy”.

Ms McClure argues that due to the scale and height of the apartment scheme plan, the impact on the Tramyard site “would be unacceptable”.

A decision is due on the application next week