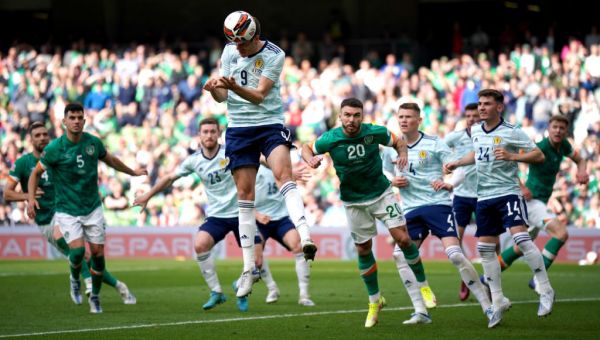 Scotland take on Republic of Ireland in the Nations League at Hampden Park on Saturday night.

Here, PA News Agency looks at the key talking points ahead of the Group B1 encounter in Glasgow.

Lyndon Dykes came off the bench to replace Che Adams against Ukraine at Hampden on Wednesday, with Scotland leading by a solitary John McGinn goal.

The QPR striker helped himself to a brace – both headers from fellow substitute Ryan Fraser corners – as the hosts clinched three valuable points.

Now Steve Clarke has to decide whether that pivotal contribution was enough to earn him a start against the Republic – the Scotland boss is delighted with the dilemma – or perhaps find a system to accommodate both Dykes and Adams.

John McGinn to chalk up half-century

The Aston Villa skipper has turned into a stalwart of the Scotland side since making his international debut against Denmark in 2016.

The former St Mirren  and Hibernian midfielder’s opening goal against Ukraine was his 14th for Scotland in 49 caps, a more-than-decent return. He will make it 50 against the Irish.

Clarke admits he is “indebted” to McGinn and hopes he gets to 100 caps, but on Saturday he will be looking for another key contribution from his vice-captain who will skipper the home side again in the absence of injured Andy Robertson.

Nathan Patterson’s first-half injury against Ukraine which saw him carried from the pitch on a stretcher was a huge blow for the Everton and Scotland right-back.

The 20-year-old former Hearts and Bologna defender’s assured performance was evidence of Scotland’s strength in depth in certain areas and Clarke will have no qualms about putting him in for his second start in what would be his sixth cap.

Back to the future for Ireland

Stephen Kenny has built his squad around a core of young players with potential, but he will have two older heads at his disposal at Hampden after lengthy absences.

Preston’s 30-year-old wing-back Robbie Brady, who scored a memorable winner against Italy at Euro 2016, has not played for his country since March last year, while Cardiff midfielder Callum O’Dowda, 27, last pulled on the green shirt in November 2020, with injuries having taken their toll.

Both players will be desperate to make up for lost time.

While Kenny has insisted he would not be afraid to leave out any of his biggest names, he has decisions to make over skipper Seamus Coleman and fellow defenders Shane Duffy and Matt Doherty.

The trio have played just five minutes of Premier League football between them so far this season, hardly the ideal preparation for a tough game against opposition intent upon revenge for June’s 3-0 defeat in Dublin.