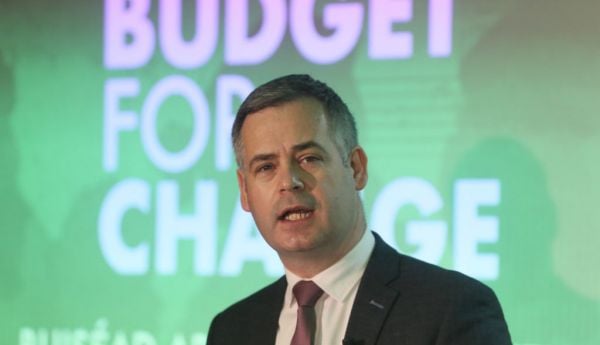 Sinn Féin has calculated it will cost €1.6 billion to freeze energy prices and ensure households have certainty over their bills this winter.

The main opposition party made the claim as it launched its alternative budget and cost-of-living package in Dublin on Friday, ahead of next week’s actual Budget.

It proposes additional spending of €13.5 billion for the rest of this year and next year in its Budget 2023 proposals.

Sinn Féin’s Budget for Change is about giving people help and certainty
to get through the winter months and building for the future.

It’s about prioritising those on middle & low incomes and a younger generation locked out of opportunity.

This comprises a €4.1 billion spend on an emergency cost-of-living package and a €9.4 billion spend for next year, which is significantly higher than the Government’s plans to spend about €6.7 billion on Budget measures.

Sinn Féin finance spokesman Pearse Doherty said capping electricity prices at 2021 levels needed to be introduced to ensure customers knew exactly what costs they would face during the winter months.

“We want to provide certainty to households that their electricity bills will be cut by over half and that they won’t go up,” he said.

“This isn’t something novel. I know the Government are out with their sound bites but right across Europe this is happening.

“In the last 72 hours, two other countries have announced they’ll bring in price certainty for their customers. It’s happening in nine or 10 different countries across Europe. It’s part of the [EU] Commission’s toolbox that was announced back in March.

“This can be done. The only thing about this issue is that it’s about political choices and it’s very clear that the Government does not want to take this political choice to give price certainty for electricity.

Mr Doherty said the party had allocated €900 million for the measure for the rest of this year and €700 million for January and February next year.

He added that these figures took account of price increases that had been signalled already and also included a further buffer of €230 million in case wholesale prices rose further during the winter months.

The party’s budget proposals included a range of measures aimed mainly at those on welfare, pensions and on lower incomes, with those on middle and higher incomes benefiting less.

The party proposes cutting childcare fees by two-thirds in the form of an immediate cut in costs by one-third, followed by a further cut next year, as well as doubling child benefit payments for the month of October, worth €140 per child.

It would also reduce taxes on petrol, diesel, home heating oil, electricity and gas and put a halt to the Government’s plans to increase carbon tax on motor fuels.

It would also increase the working age and pension payments by 15 euro from next month.

Party leader Mary Lou McDonald said: “The message we’re sending to Government today is that Budget 2023 must be about change.

“It must address what really matters to workers and to families, treading water and recycling the policies that have failed so badly for 20 years just won’t cut it.