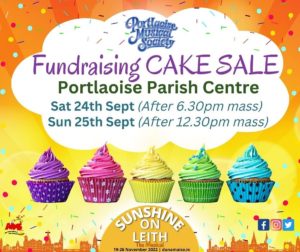 Tickets for the Portlaoise Musical Society’s Irish musical premiere of the sensational stage hit show ‘Sunshine on Leith – The Musical, which went on sale just days ago are selling like hotcakes.

After a three-year interval, due to the pandemic, the sensational stage hit show will take place in the Dunamaise Arts Centre, Portlaoise from Saturday 19 to Saturday 26 November.

The Irish musical theatre premiere of Sunshine on Leith which was written by Stephen Greenhorn featuring songs by The Proclaimers went on sale last week and are selling very well.

The show features an award-winning production team including Director: Paul Norton, Musical Director: Emer Hartnett and Choreographer: Stephanie Browne and a cast and chorus of more than 50 people.

Commenting on the ticket sales so far the cast said: “We are thrilled that tickets for our show are selling like hot cakes at Dunamaise Arts Centre, but we can’t get on stage without fundraising. So, it’s time to sell the real cakes and bring in some dough for our what’s going to be one whopper of a production.”

The cast are asking that you support its fundraising cake sale this weekend at Portlaoise Parish Centre which takes place on this coming Saturday 24 September after 6.30pm mass and on Sunday 25 September after 12.30pm mass.

On offer will be scrumptious treats like cakes, tarts, cupcakes, tray bakes and homemade breads

Tickets for the show are available from the Dunamaise Arts Centre at www.dunamaise.ie or by phoning 057 8663355.