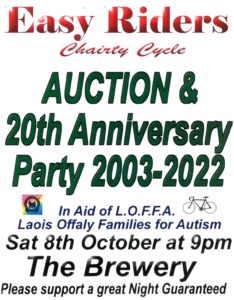 To mark the occasion, it is holding an anniversary party and auction as well as a raffle for a framed signed football jersey from the former Liverpool and LA Galaxay footballer Steven Gerrard.

The party and auction will be held in The Brewery, Rathdowney on Saturday 8 October from 9pm.

The club said that it would love to see as many past and present members on the night to help them celebrate the club’s history.

Tickets for the raffle for the jersey are €10 each, limited to 100 tickets. The draw will take place during the anniversary party. Tickets are on sale in The Card Stand and The Brewery.

All proceeds from raffle will go to the Laois Offaly Families for Autism (LOFFA).