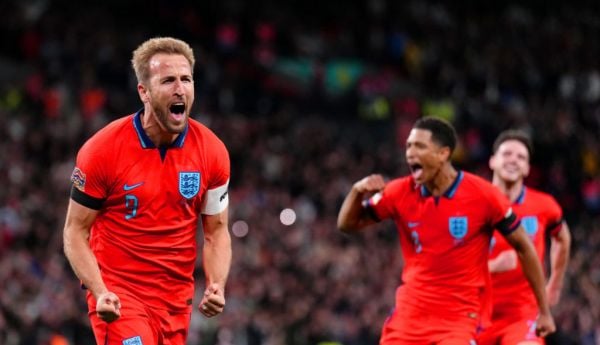 England head to the World Cup buoyed by a rousing comeback against Germany but a late error by Nick Pope meant under-fire Gareth Southgate’s side had to make do with a 3-3 draw at the end of a frenetic second half.

Among the favourites to triumph in Qatar having reached the semi-finals four years ago and finished runners-up at last summer’s Euros, hope and optimism has seeped away in recent months.

England were relegated from the Nations League top tier following Friday’s loss to Italy and pressure looked set to increase on Southgate, and Harry Maguire, after Ilkay Gundogan’s penalty and a stunning Kai Havertz strike.

A breathless second half at Wembley ends 3-3. pic.twitter.com/fsUOZfNwCp

But the hosts displayed the kind of resilience and ruthlessness their manager called for in the build-up in front of a sold-out Wembley crowd that did not turn on the group.

Wembley was bouncing and the noise went up several notches when Harry Kane slammed home an 83rd-minute penalty following Nico Schlotterbeck’s foul on Jude Bellingham, but there was to be no return to winning ways.

Havertz tapped in after back-up goalkeeper Pope spilled a Serge Gnabry shot, meaning England go to Qatar without a win in six but boosted by a much-needed show of skill and spirit.