Portarlington hold on to beat Garda Westmanstown in the rain 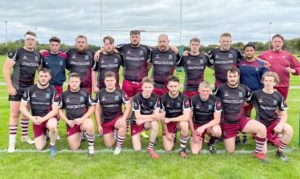 PORTARLINGTON got back to winning ways in the rain on Sunday afternoon, scoring three tries to beat Garda Westmanstown by 15 points to 12 at Lea Road. The hosts were forced to hold on in the end, having been the better team for most of the game.

Portarlington got off to a great start, playing some good, physical rugby and got in for a try inside the first five minutes. Ross Doyle went on one of his trademark runs, powering through and around defenders before laying the ball off to his centre partner, Jordan Fitzpatrick, who sent winger, Jack Walsh into the corner for five points.

Walsh was on kicking duties, taking over from regular kicker, Kieran Hyland, but failed to add the extras. Hyland, without the added pressure of goal kicking, had one of his best games at fly half in recent times, directing his players well around the pitch.

Portarlington then scored in the opposite corner midway through the first half. Full back, Adam Kelly took a great line, running through numerous defenders, creating the space for Warren Murray to touch down. It is the openside’s third try in as many games as the young man continues to be a real leader for this team.

The Garda scrum half, Nathanael Costa Wallace soon grabbed a try back for his team, scoring a sniping try off a pick and drive on the Port try-line. But the hosts restored their ten-point lead shortly before half-time. Adam Kelly attacked the Garda line, drawing in two defenders before playing the ball wide for Jordan Fitzpatrick to make it 15-5.

Regular Portarlington captain, Fintan Murphy was absent today, so deputising in his place was loose head prop, Jack Hennessy. And what a game that man had. Hennessy truly led by example today, showing his team the way by putting his body on the line, showing up in the right position, and maintaining a level of handling as good as the backs; a player of the match performance to be proud of.

Hennessy was a bedrock of the Portarlington scrum, which was hugely improved from the two previous fixtures. The new-look front row was solid as the forwards provided those slick Port backs with a lot of quality ball.

But for all their good work, Port will be kicking themselves for how the second half played out. The host’s frustration was growing as the could not add to their tally despite periods of prolonged pressure in the Garda half. This led to the hosts losing their discipline, which was eventually punished in the 70th minute, when Garda No 8, Brendan Darcy crossed for a try.

But Portarlington saw the game out an held on for an important victory. They are back at home next week as they face struggling Arklow. The Wicklow men are without a single bonus, shipping a century to Balbriggan two weeks ago, losing 100-7. Portarlington will be hoping the can use the game to build on their good start to the season.