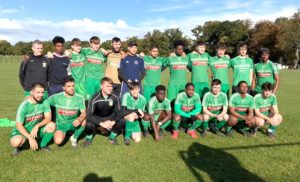 PORTLAOISE travelled to The Grove to play a Rosenallis side who sat top of Division 1 coming into the game with a 100% record. Portlaoise currently sat bottom of the league after two games coming off a tough 1-0 loss to Gallen Utd last week.

Rosenallis started the brighter side with constant pressure on the Portlaoise defence in the first 15 minutes and that pressure paid when Conor Friel hit a sweet strike from just outside the box that dipped into the bottom left corner beyond the reach of McHugh in the Portlaoise goal.

Portlaoise eventually started to grow into the game with a couple of half chances from Davis Pedro and Jake Comerford but it was Comerford who gave them their biggest shout of the half when he was played into the Rosenallis area and beat the onrushing full back with tidy turn. He seemed to have the legs swept from underneath him but the referee thought differently and it was waved away to the dismay of the Portlaoise sideline.

Trailing 1-0 at half time, Portlaoise made two substitutions at the start of the second half, Jason Horan and Osema Boulakdhar and they were to be instrumental for the town side in the second half.

Portlaoise carried their momentum from the end of the first half with them and started the brighter side when Jason Horan won a free 25 yards out on the left flank. Emmanuel Ayodeji stepped up and whipped in a super left footed ball into area which Boulakdhar stooped low to head the ball into the far corner of the net for the long awaited equaliser.

Portlaoise didn’t take their foot off the throttle and moments later Ayodeji played a ball over the top to the energetic Boulakdhar who didn’t give up on it when the Rosenallis keeper came out to collect. He thought he had more time than he did when he put his foot on the ball before picking it up but Boulakdhar nicked it away, turned and curled in a lovely left foot finish from the end line into the empty goal.

Now leading 2-1 the town men were now really playing with confidence and controlling the game, playing out from the back in tight pockets regularly. It was in one of these instances that James Wheeler played a ball down the left wing to Davis Pedro who flicked the ball around the full back and took off like a hare down the sideline. He got into the Rosenallis box and slotted a lovely pass across the area to Boulakdhar who tapped home to complete his hattrick with less than 40 minutes played on the pitch.

Rosenallis didn’t give him up though and pulled one back late on through John Lennon but it proved only to be a consolation as the referee blew his whistle shortly after.

Aaron Brennan and Lee Carroll, who came on for the injured Gavin Comerford early in the first half, were both rock solid at centre back and David Olubowale also had a huge game in midfield working tirelessly throughout.