Portarlington get their day in the sun 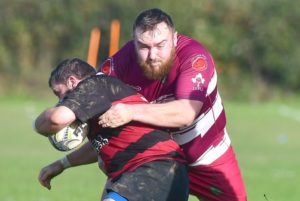 Portarlington’s Aaron Ryan gets to grips with this Arklow forward Photo: Denis Byrne

PORTARLINGTON have climbed to second place in Division 2B of the Leinster League, beating Arklow with a four-try bonus point. The win comes a week after Portarlington survived a late scare to beat Garda Westmanstown in the rain.

On Sunday tries from Ross Doyle, Adam Kelly, Mark Petriw, and man of the match, Eoin Worrell, gave the hosts all five points – just rewards for their best performance of the season.

Jack Mallon set the tone with two colossal hits in the opening seconds of the game. Soon after Portarlington attacked the Arklow line as they moved the ball through the hands. Flanker, Warren Murray rode the tackle before popping the ball off expertly to Ross Doyle, sending the big centre into the corner for a try inside the first two minutes.

Doyle formed a brand new midfield partnership on the day with Adam Lamkin, traditionally a full back. Portarlington finally got to play with the sun on their backs, having played exclusively in the rain so far this season, and their experimental back-line took full advantage. As well as kicking well from hand, fly half, Kieran Hyland drove the backs around the field, seemingly choosing the right pass every time.

When the back three of Adam Kelly, Jack Walsh, and Eoin Worrell couldn’t unpick the Arklow defence, Portarlington turned to their forwards to make the hard yards. And few do that better than Toby Nielson-Dry. Every time the No. 8 got the ball in hand, he used his immense power to run at defenders and make ground for his side.

For all Portarlington’s flair going forward, it was a defensive tackle from young Eoin Worrell that defined the first half. The winger was one of the slightest men on the pitch, but hit the Arklow No. 8, Eamonn Quirke, with a crunching tackle on halfway. The much bigger forward was clearly hurt and took a while to get back to his feet. This gave Portarlington a huge psychological edge.

Arklow were getting the better of the scrums in the first half and starved Portarlington of quality ball as a result. However, the Portarlington scrum was much improved in the second half, allowing their wirey backs to get onto the score sheet.

The hosts grabbed their second try ten minutes into the second half through Jack Kelly. Portarlington kept the ball in hand from the left touchline all the way to the right where the full back stepped the last defender to finish off a wonderful team try.

Substitute, Mark Petriw powered over from close range for a third try before Portarlington secured the bonus point late on. A quick tap penalty from Kieran Hyland went to Adam Lambkin who fed Eoin Worrell out wide. The winger made no mistake and handed Portarlington a comprehensive victory.

Portarlington’s next game is in two weeks when they must travel away to unbeaten Balbriggan. 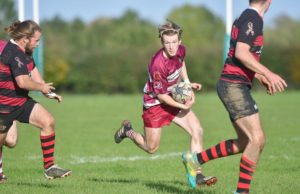 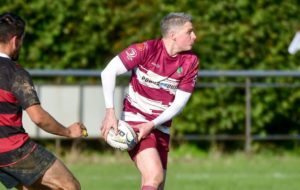 Kieran Hyland about to release this ball Photo: Denis Byrne 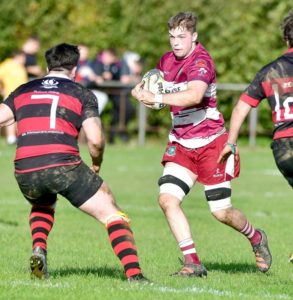 Club football about to get up and running