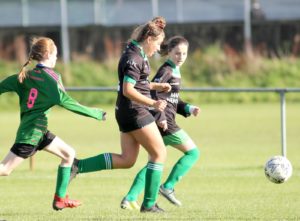 DESPITE the heavy rain and threat of showers, a bright and breezy day greeted the Portlaoise AFC U/14 girls’ team in Rossleighan on Saturday morning. After a heavy defeat in the first round of the SFAI Cup the previous week, Portlaoise were looking for an improved performance to get things back on track.

Leah Gibbons was captain for the day and took the toss and Portlaoise lined up to play into the breeze for the first half. The opening ten minutes were balanced with neither side creating any chances. However, Hodson Bay were dominating possession and territory, with most of the play being in the Portlaoise half of the field.

The Portlaoise back four of Aoibhin Moran, Ava Donovan, Hannah Scully and Clodagh Booth were stretched on a couple of occasions. Leah Gibbons produced two excellent saves to keep the score line at 0-0.

On the 20-minute mark Hodson Bay quickly moved the ball out to their left wing. A clever through ball set their attacker away in the inside left channel. She drove into the penalty box and her shot hit the back stanchion to the keepers left, putting Hodson Bay 1-0 up.

Unlike previous games Portlaoise kept their concentration and did not let the 1-0 deficit bother them. They started to play their way into the game. They created a couple of half chances themselves, but were struggling to get forward as a unit, leaving the front pairing of Rachel Kelly and Erin Kavanagh too much to do.

Turning just one down was a fair reflection of the game. The Portlaoise midfield was now getting more joy in moving forward. Moya Ramsbottom was able to link up with the front two. Katya Buckova and Emily Kelly worked hard up and down the flanks. Sarah Vostinar was playing in a new role of defensive midfielder and did a great job protecting the back four.

Like the first half there was very little between the team, with Hodson Bay still looking the more likely to score. On the 10-minute mark they made the breakthrough to go 2-0.

This produced Portlaoise’s best spell of the game with Erin Kavanagh being unlucky to get closed down at the last second before she could get her shot away on one occasion. She never gave up and a few minutes later, with Hodson Bay pushing out, she latched onto a ball just over the halfway line. A neat turn beat the centre back and she was away. A cool finish got Portlaoise back into the game.

It remained 2-1 until Hodson Bay got their third with just 10 minutes left in the game. Rachel Kelly was now in goals for Portlaoise and made and excellent initial save, but the ricochet got past her. She scrambled back to keep the ball from crossing the line but was unable to keep her feet. First to react was the Hodson Bay attacker who smashed the ball to the back of the net from a yard out.

A couple of late goals were added by Hodson Bay in the final couple of minutes as the Portlaoise team tired. This was a much-improved performance from the team. With notable displays all over the pitch.