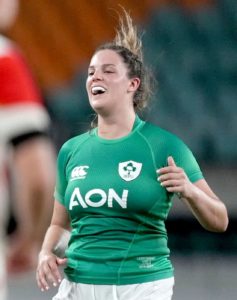 Having just made her International debut in August, Leah Tarpey was among the first tranche of women players to be offered and accept professional contracts from the IRFU Photo: ©INPHO/Akito Iwamoto

ON Wednesday last (2 November), the IRFU announced the list of 29 women rugby players who had agreed terms on professional contracts – 10 players from the XVs team and 19 from the sevens team. The contracts are worth between €15,000 and €30,000 per annum, plus incentives that could take the top earners to €45,000 if they hit their targets.

Kilcavan’s Leah Tarpey was one of the 10 players who took up the IRFU’s contract.

“I found out Tuesday via a Microsoft team call with Gillian McDarby (Head of Women’s Performance and Pathways),” she said. “I had until the 18th of October to accept or reject, but personally, for me, it was a no brainer to take the contract.”

Leah went on to say: “I had some stress around college and trying to work out a way to train and work daily and still find time for my education. But at the end of the day, this is a historic moment for female rugby players; a moment that we only dreamed of. And I felt as though I couldn’t pass up the opportunity to be one of the first female professional rugby players in Ireland. It gave me the opportunity to create my own reality.”

The IRFU’s plan to create an elite tier of professional rugby players has been a long time coming, but for many, it didn’t seem real until the ink was dry on the contracts. Tarpey acknowledges the advantages that come with being in this position, especially at such an early stage in her career.

“Things like this don’t usually just happen to someone at my age so I’m definitely so grateful and just beyond excited to get going! I’m surrounded daily by my management team, other staff members and players, all of whom I love and admire and who make me feel at home. I definitely understand that I am in such a privileged position.”

Tarpey signed a one-year contract which expires on 31 October 2023, but it can be extended at the end of that period if both parties agree.

“I’m honestly just delighted to be a part of this new and developing model and essentially getting paid to do what I love. I feel very lucky to be in the position I am,” she said.

Tarpey says the opportunity to be contracted comes with a major responsibility to those who came before her and laid the groundwork for the women of today and tomorrow.

“I’m looking forward to getting stuck into the program and overall, just becoming a better rugby player. We owe it to all the unbelievable players who represented Ireland before us, who sacrificed so much, to make the most of this opportunity and created a hype around the Irish women’s game, and hopefully reassure them that the future of Irish rugby is bright in doing so.

“My goal right now is to push myself to keep building and progressing, with the ultimate aim being inclusion in the Women’s Six Nations 2023,” she said.

Head Coach, Greg McWilliams described the announcement as “a massive day, not only for the Irish Rugby Women’s XVs program but for so many young female athletes in Ireland who can now say ‘I want to be a professional rugby player.”

The IRFU had targeted bringing as many as 43 professionals together, but a large group of senior players, including captain Nichola Fryday, Players’ Player of the Year, Sam Monaghan, and Writers Player of the Year, Neve Jones, turned down the contracts in favour of remaining in the English Premiership. Other players, including Portlaoise hooker, Emma Hooban, have chosen to continue pursuing their careers in Ireland.

Hooban told the Laois Nationalist: “The contract I was offered just wouldn’t have been financially feasible for me. I just hope it’s a starting platform and the professional contracts will continue to grow so that people can be in a position to buy in.”